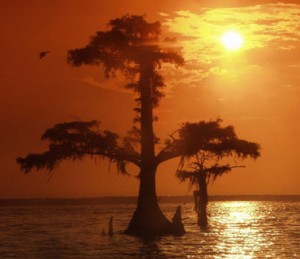 The cypress is often considered one of the most recognizable symbols of the southern swamp, and in 1963, it was given the distinction of Louisiana State Tree.  The tree is called the ‘bald’ cypress because it is a deciduous evergreen, losing its leaves in the winter months.  “Cypress” is derived from the French “cipres”, which in turn comes from the Latin “cyparissus”.  In Greek mythology, Cyparissus was a young man/boy whose favorite companion was a tamed stag.  He accidentally killed the beast with his hunting javelin as it lay sleeping, and his grief was such that he transformed into a cypress tree.

“Sinker” is Cypress that has been recovered from under the mud and water of local bayous and waterways.  The wood is very unique because of the tightness of the grain and variation in shades of color.  Sinker cypress is now considered a good “green” alternative, and recovered wood is generally between 50 and 150 years old, or older.