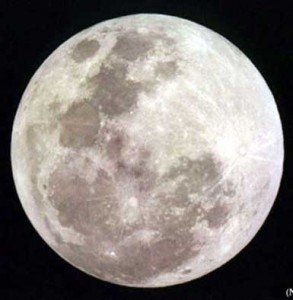 Once in a blue moon… is today, apparently. Here is some neat trivia on what a blue moon actually is.

One lunation (an average lunar cycle) is 29.53 days. There are about 365.25 days in a solar year. Therefore, about 12.37 lunations (365.25 days divided by 29.53 days) occur in a solar year. In the widely used Gregorian calendar, there are 12 months (the word month is derived from moon) in a year, and normally there is one full moon each month. Each calendar year contains roughly 11 days more than the number of days in 12 lunar cycles. The extra days accumulate, so every two or three years (7 times in the 19-year Metonic cycle), there is an extra full moon. The extra moon necessarily falls in one of the four seasons, giving that season four full moons instead of the usual three, and, hence, a blue moon.

According to Google Calculator, “once in a blue moon” is equal to 1.16699016 × 10-8 hertz. The hertz is a unit of frequency (one per second), and thus if the mean length of time between blue moons (2.1745 years according to Google) is metricated and converted to a frequency (by calculating the multiplicative inverse), it can be expressed in terms of hertz.

The term has nothing to do with the actual color of the moon. A literal “blue moon” (the moon appearing with a tinge of blue) may occur in certain atmospheric conditions, e.g. volcanic eruptions and exceptionally large fires can leave particles in the atmosphere.

Using the Maine Farmers’ Almanac definition of blue moon (meaning the third full moon in a season of four full moons, and where the seasons are marked by equal 3 month intervals between solstices and equinoxes as opposed to calendar quarters), blue moons have occurred or will occur on:
November 21, 2010
August 21, 2013
May 21, 2016
May 18, 2019
August 22, 2021

Information sourced from Wikipedia.org. Go to http://en.wikipedia.org/wiki/Blue_moon to find out more.