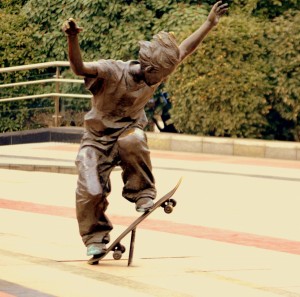 I remember a time when I rode my Vision Gator (which I bought from my friend Geoff) all over the Abita Springs town hall, and for a while there, it probably upset Mayor Gowland. I would go down to the park, but the concrete was a mess, and it would always end up pitching you into the gravel or the dirt.  I could usually find some skaters on a subdivision street somewhere, or better yet, a new development.   There was nowhere to skate back then, and it’s possible that the Covington kids won’t have anywhere to skate now, at least downtown.

This Tuesday, the Covington City Council will discuss banning skateboarding in downtown Covington.  Banning skateboarding would set the precedent of outlawing a legitimate form of exercise and impact at least one downtown business, possibly more.  If skateboards in downtown are a serious enough issue to consider banning them, then perhaps an alternative could be offered by way  of a skatepark/recreational area, as other municipalities have done.   It could be an attraction for the city that encourages growth in the current business environment while promoting healthy, active lifestyles. Examples of this can be found in Hammond (Zemurray Park) and also in Mandeville (Pelican Park).  The City Council meeting is Tuesday, March 18th at the City Council Chambers for those interested in attending.                               222 Kirkland Street @ 6 p.m.