The Center of Performing Arts continues their Friday Night Music Club this weekend with The Pfister Sisters. This popular concert series is held the first Friday of the month. The Spring 2015 season, a series of five concerts, features noted New Orleans musicians for an intimate evening of songs and stories. Each concert is from 8pm-10pm, and will feature two sets of music and an intermission. Attendance at these events includes Meet and Greet time with the artists before the show and at intermission. Ticket are available online at COPA’s webstore. 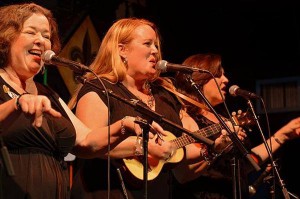 Since 1979, the Pfister Sisters have been bringing traditional jazz from New Orleans to the world. Holley Bendtsen, Yvette Voelker and Debbie Davis (in truth, neither Pfisters nor Sisters) have shared stages with everyone from Linda Rondstadt and Irma Thomas to Maxine Andrews of the Andrews Sisters. Steeped in New Orleans traditional jazz, they carry on the legacy of innovative jazz vocal harmony begun by New Orleans’ own Boswell Sisters in 1925. The subject and stars of an original show in Berlin’s premier cabaret venue, the “sisters” have toured the US and Europe, performing in venues as diverse as Jazz at Lincoln Center, the Ascona Jazz Festival and Angola State Penitentiary as well as having played themselves in an episode of the HBO series, TREME. They continue to be staples of the New Orleans Jazz and Heritage Festival and perform regularly domestically and abroad.