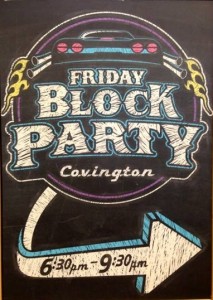 With the return of Spring, Covington’s Block Parties are back! The St. John’s Historic District features many fantastic restaurants, watering holes and great shopping at local retail stores. The cars line Columbia Street and music fills the air as downtown comes alive on the last Friday of the month March through October. Streets are closed along Columbia and Boston streets during the block party, from 6:30 – 9:30 pm. 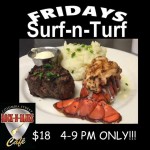 Columbia St. Rock N Blues cooks up a surf and turf special on Fridays from 4 – 9 pm only, featuring filet and lobster – yum! Rock N Blues will have the Bass Wagon outside with 80’s music inside, and DJ Hollywood gets going after the block party ends.  407 N Columbia Street

Winos & Tacos will feature the Stoop Kids, a blend of hip-hop, doo-wop, surf rock, jazz, and everything in between, playing on the back patio starting at 8 pm!  321 N Columbia Street