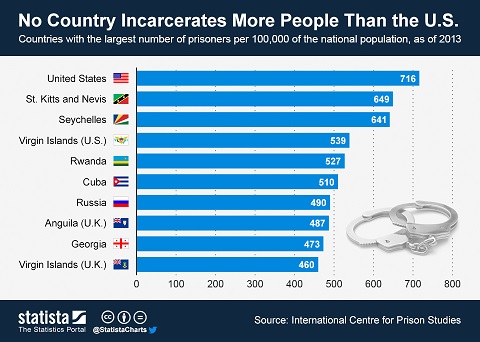 Just two years ago, the former 22nd Judicial District Attorney’s Office distributed “St. Slammany” plaques to ADAs for their aggressive prosecutorial efforts.  Last week, the current 22nd Judicial District Attorney Warren Montgomery stood with Covington Police Chief Tim Lentz and Mayor Mike Cooper, among a wide array of Parish Administration and Law Enforcement, in announcing Operation Angel, a program developed to offer help to drug addicts instead of arresting them.  This program marks a 180 degree shift in policy from “St. Slammany” days, and as Chief Lentz stated, “It’s time we change the way we do business in St. Tammany.”
Much research material is available on Louisiana’s for-profit prison system, which results in the State holding the highest incarceration rate, per capita, in the world.  It is interesting to note that America, a free and democratic country, maintains higher incarceration rates than communist, authoritarian or totalitarian regimes.  While non-violent offenses like simple possession with multiple counts can climb easily to a near one hundred thousand dollar bond, violent offenses like assault can be as low as a ten thousand dollar bond.  This suggests an emphasis on non-violent crime as a revenue stream, and the Operation Angel program could work to correct this situation, hopefully resulting in a sharper focus on crimes with a victim, rather than victimless crime.

Considering that St. Tammany Parish is at the center of the USA’s staggering incarceration rate, the implications of this policy change now put St. Tammany in a National Leadership role, along with Gloucester, MA, where the program originated.  Congratulations to Chief Lentz and our Parish Leaders for initiating this program, who reported calls and walk-ins across the parish within hours after the announcement was made.