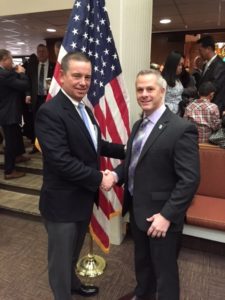 We are proud to announce that Lt. Joey Mayberry, only the second in Covington Police history, graduated from the prestigious FBI National Academy last Friday (Dec. 16th).  Chief Tim Lentz, Past President of the Louisiana chapter of FBI National Academy Associates, was able to attend the graduation in Quantico, VA.  Mayor Cooper joins Chief Lentz in congratulating Lt. Mayberry on this wonderful accomplishment, and his representation of the City of Covington and the Police Department at this exclusive training.

Two hundred and twenty –two Law enforcement officers graduated today from the FBI National Academy Program at Quantico, Virginia. The 266th Session of the National Academy consisted of men and women from 48 states. Included in the class are members of law enforcement agencies from the District of Columbia, 20 international countries, five military organizations, and eight federal civilian organizations.  Internationally known for its academic excellence, the National Academy Program, held at the FBI Academy, offers 11 weeks of advanced communication, leadership, and fitness training for selected officers having proven records as professionals within their agencies. On average, these officers have 21 years of law enforcement experience and usually return to their agencies to serve in executive-level positions.

FBI Director James Comey was the principal speaker at the ceremony. Training for the program is provided by the FBI Academy instructional staff, Special Agents, and other staff members holding advanced degrees, many of whom are recognized internationally in their fields of expertise.  Since 1972, National Academy students have been able to earn undergraduate and graduate credits from the University of Virginia due to the accreditation by the university of the many courses offered.  The graduating officers were represented by the class spokesperson, Thomas Anthony Verdi, Deputy Chief, Providence Police Department, Providence, Rhode Island. A total of 49,686 graduates now represent the alumni of the FBI National Academy since it began in 1935.