From humble beginnings in Arkansas during the Depression era and exotic Morocco of his teen years to Oxford University as a young scholar and his eventual settling in New Orleans, David Campbell continuously found himself attracted to the mysterious and the bizarre. The Double Life: A Survivor’s Guide to Transcend Success and Tragedy chronicles Campbell’s eighty-year journey as he lived a double life and how he reconciled himself with his sexual identity, his battle with addiction, and his coming to terms with the nature of God and his place within the universe.
Campbell examines not only the personal details of his life, his family, and relationships, but also the intricacies of life as a gay man and prominent attorney in New Orleans during the 1960s, his entry into the city’s historic preservation movement of the 1980s in which he became the first person to convert a warehouse into a private residence in New Orleans’ Central Business district, and his eventual retreat to the sanctity of a nature preserve in St. Tammany Parish, Louisiana. Along the way, he reveals the stories behind the stories in the practice of law, the art world, preservation, and 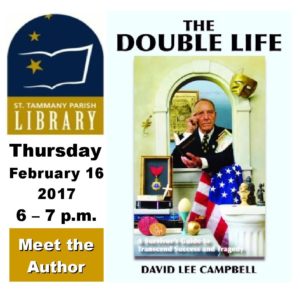 conservation, all in the context of living a double life.

The Double Life: A Survivor’s Guide to Transcend Success and Tragedy records the accounts of a man who witnessed the beauty and devastation of life while he captures the spirit of New Orleans during the latter half of the twentieth century.    doublelifeneworleans.com
The St. Tammany Parish Library has been serving the citizens of St. Tammany Parish for more than 65 years.          (985) 893-6280      sttammanylibrary.org