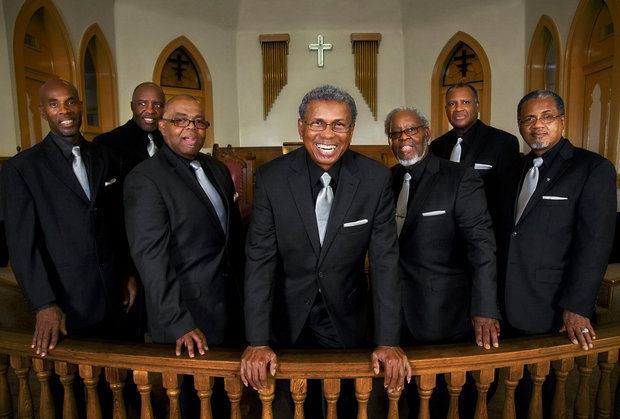 This week at the City of Covington’s free concert series at the Trailhead, Rockin’ the Rails, don’t miss the sweet sounds of the Zion Harmonizers, a New Orleans Gospel group that has brought music to the world for over 70 years.  The Zion Harmonizers are living legends, and they perform all over the globe to receptive audiences.

Organized in 1939 by Benjamin Maxon, The Zion Harmonizers formed out of an old neighborhood in New Orleans known as “New Zion.”  Maxon’s Aunt, Alberta French Johnson, was leader of the women’s Gospel group The Southern Harps.  She taught her nephew and his friends (Sherman and Nolan Washington) the ways of traditional gospel quartets, a style that they still practice to this day.  Sherman Washington joined the Zion Harmonizers as a teenager in 1941 and led their glorious four part harmonies for nearly 70 years.
Throughout the years, the members have changed a little and the Harmonizers have added some instruments.  The group is also known for their brightly-colored matching suits as well as their harmonies, and they still rely heavily on the old-time a cappella style.
Rockin’ the Rails at the Covington Trailhead is a Free Concert Series open to the public, taking place every Thursday evening in the months of April and October.  Bring a chair or a blanket, relax, and enjoy the show.  Food and Beverages are available for purchase, sales of beer and wine to benefit local non profit organizations.