Nicholas M. Greaver was hired by the Covington Police Department back in August of 2016.  Nicholas recently completed the POST Training Academy in Slidell where he accomplished the following:
3rd place in Firearms
2nd place in Academics
Nicholas is a Graduate of the U.S. Coast Guard Academy 2011.  Holds the rank of Lieutenant with the U.S. Coast Guard District Eight Command Center in New Orleans
St. Paul’s Graduate (Brooklandville, Maryland).  He also graduated from Coast Guard Academy with a Bachelor of Science in Management.  During his time with the Coast Guard, Nicholas has received the following honors: 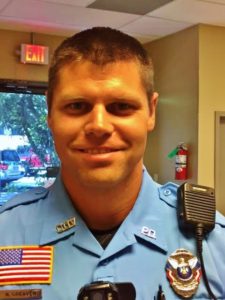 Nicholas recently completed his Field Training Program and now patrols the street of Covington in solo status.  We are proud to have Nick part of our team.