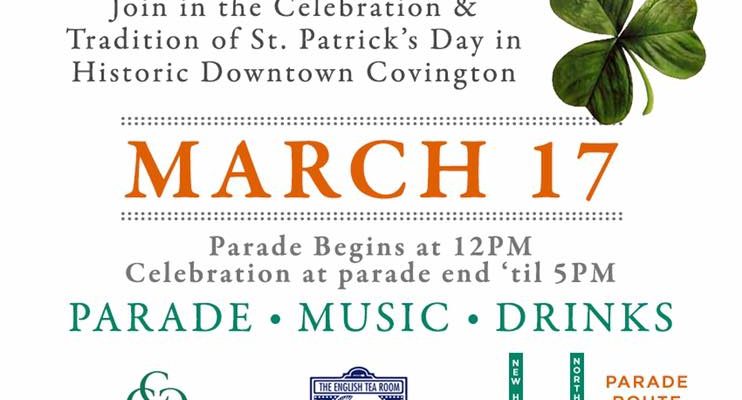 On Saturday, March 17, 2018 beginning at 12 pm, the Covington Celtic Club will host its Second Annual St. Patrick’s Parade and Celebration throughout historic Downtown Covington. After much positive response from the community and participants in the inaugural year (2017), CCC is excited to march again! Parade will begin at the Columbia Street Taproom, turn onto Gibson, head towards Lee Lane and then down Rutland Street, ending at Jewel’s Cigar and Briar at the corner of Rutland and New Hampshire, where a block party will take place featuring food, drinks and live music. 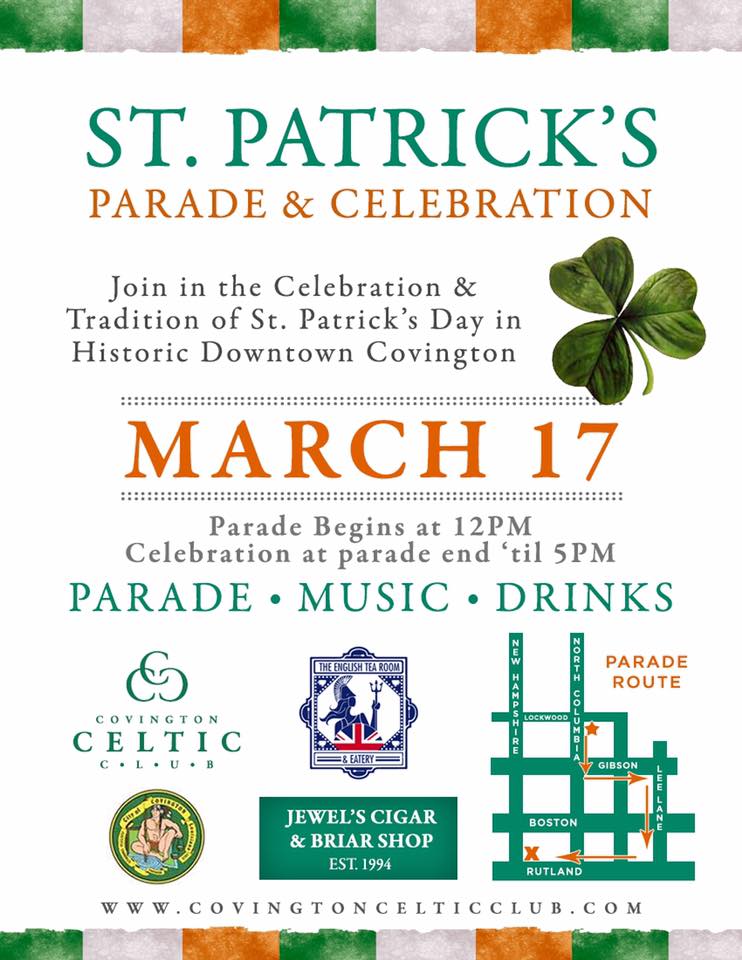 Some businesses along the route are having their own mini-parade watch parties including The English Tea Room and Eatery on Rutland Street. In addition to the 75+ (and growing!) CCC members handing out the traditional paper flowers, the parade itself includes a lineup of Irish Wolfhounds, bagpipers, Irish dancers, British cars, St. Paul’s Marching Band, Covington Fire Department (in kilts!), The Fools of Misrule, a special surprise guest Grand Marshal, Mayor Mike Cooper, Northlake Performing Arts Society, The Covington Bicycle Club, and more!
Cody Ludwig, president of CCC who is heading the effort of continuing to bring a festive, family-friendly St. Patrick’s celebration to the Northshore community along with her husband Nick Ludwig explained, “Both of us have Irish blood in our veins… but it was Nick’s great-grandfather, John J. Sheahan, the New York City St. Patrick’s Day Parade Chariman from 1939-1958, who inspired us to bring such a wonderful celebration steeped in tradition to Covington.” Mr. Sheahan was one of the 250-year-old parade’s longest serving chairmen and most notable for bringing the first sitting U.S. President to the NYC St. Patrick’s Parade, Harry S. Truman, in 1948.
Each year, in mid-March, millions of the Irish, both native and by descent, together with friends of all ancestries celebrate Ireland’s patron saint, Patrick… CCC looks forward to once again bringing that time-honored tradition to historic downtown Covington! It is even more special that this year St. Patrick’s Day falls on a Saturday allowing the club and parade to march on the traditional feast day. Whether you’re Irish or not, we invite everyone on the Northshore and beyond to reel in our historic streets, celebrated St. Patrick’s Day and see how our restaurants, local businesses, and shops throw a celebration to remember!