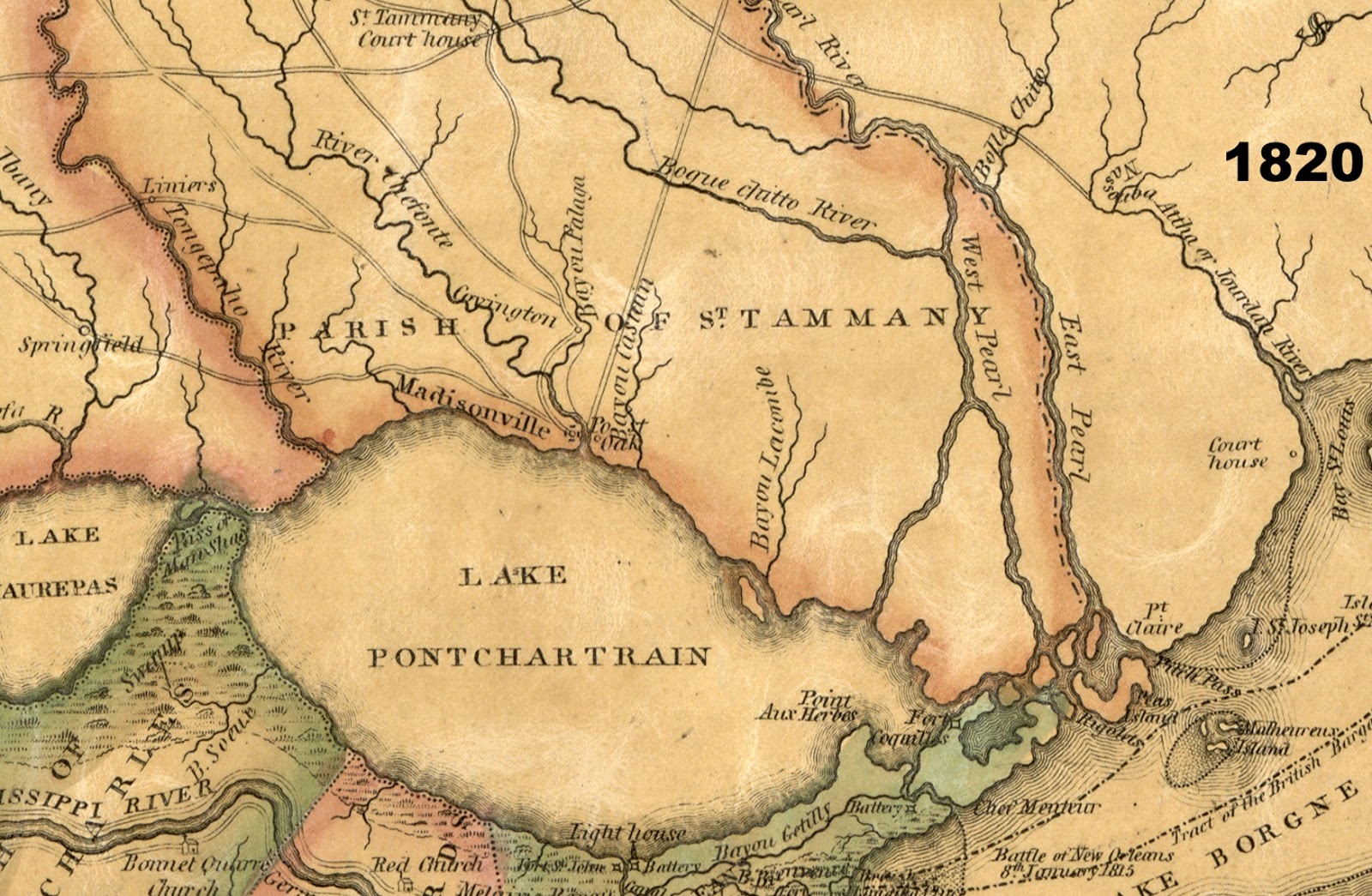 The history books credit Jacques Dreux as the founder of the Covington area, and while much is known about where he came from and what he did while he was in western St. Tammany, the facts grow dim as to where he went after he left Covington and what he did as an encore. His fate was researched by several interested parties in the 1980’s, and the article below is the result of some of that research.

Click on the image below to see a larger version of the article.

According to the article, one hundred and ninety-four years ago, a fellow decided that western St. Tammany would be a good place for a town, situated on the crossing of a major waterway and a major land trade route from Mississippi.

The land upon which the City of Covington now stands was once owned by Jacques Dreux, who came into the area and laid out the town on the west bank of the Bogue Falaya River at the head of navigation. That was probably just south of where the present downtown area is located, considered to be a “highly desirable” site due to the river access and trade route from Mississippi.

According to a St. Tammany Parish history written by Frederick Steve Ellis, Jacques Dreux first took posses­sion of his property around 1800 after receiving a 640-acre Spanish land grant. In 1813, the Dreux tract was acquired by his neighbor John Wharton Collins, who on July 4, 1913, dedicated the town of Wharton.

After that, the name of Jacques Dreux disappears from the history books and the known genealogical records as well, making him to some extent a mystery man. He was born in 1778, but where he died is unknown.

Dreux’s original name for Covington was St. James (or St. Jacques), but there was no exact location of this particular com­munity. The town was formally incorporated on March 11, 1816, by legislative act and its name changed to Covington.

In research conducted by Louis de la Vergne, a Covington area resident, the Catholic Church records are clear that, while Dreux himself did not marry and have children, 4 a number of present-day Covington area families seem co-Iaterally linked to the Dreux genealogy.

Jacques Dreux descended from Mathurin Dreux (1699-1772), his grandfather, and fam­ily names allied with the Dreux included the Saunhac du Fossat familv (which evolved into the Soniat name), the de la Vergne family line and even the Villere family name, which ties in with Covington’s former mayor Keith Villere’s genealogy.

After he left Covington, Jacques Dreux may have gone, to Mobile or Pensacola, says William deMarigny Hyland, the historian of St. Bernard Parish. “His family had a tradition of following the Spanish govern­ment, and when the Spaniards retreated out of the area he may have gone with them,” Hyland said.

Bernard deMarigny laid out the town of Mandeville in the late 1820’s, and he and Jacques Dreux were about the same age, according to Hyland. They undoubtedly knew each other, he said, and were members of a group of New Orleanians interested in developing the north shore of Lake Pontchartrain. “These guys all knew each other,” says de la Vergne.

“People had been settling in St.Tammany in the late 1700’s,” Hyland explained,” and they knew the Anglos were interested in building up trade with New Orleans. It was obvious even back then , that the Northshore had potential, he stated.