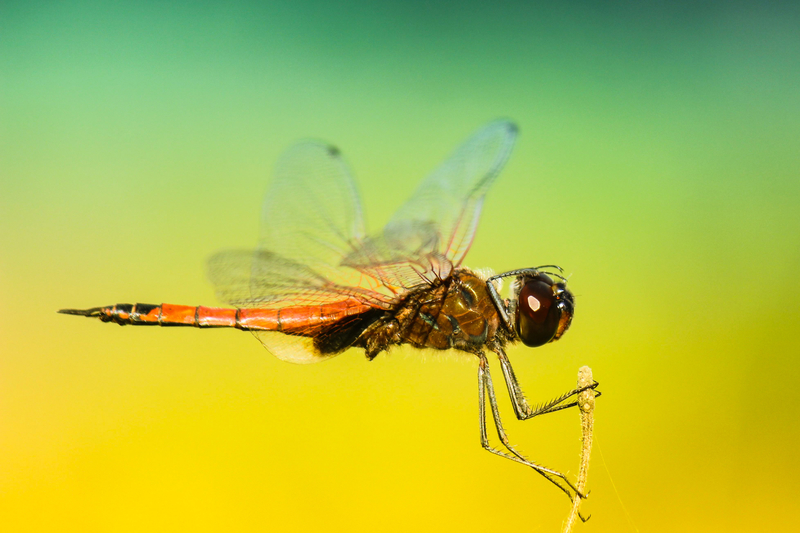 Summer in Louisiana would be incomplete without dragonflies – or as we like to call them – Mosquito Hawks. I remember as a kid late summer afternoons, sitting at the banks of the river and watching these incredibly agile fliers swoop and dive, catching their dinner. Natural predators, a dragonfly can consume as much as a fifth of its body weight per day. They are also considered one of the world’s most efficient hunters, catching up to 95% of their prey.

A large part of this prey is mosquitoes. A single dragonfly can eat hundreds of mosquitoes per day. Add this to their tendency to swarm by the hundreds – sometimes thousands – and you’ve got one heck of a mosquito abatement program. Nature wins again.

Part of their effectiveness in hunting has to do with the dragonfly’s amazing vision. They have compound eyes, consisting of thousands of individual lens that can see in practically every direction except for directly behind them. In fact, a dragonfly’s head is mostly just eyes with a mouth.

Their unusual flight patterns are attributed to the two sets of independently moving wings, giving them the ability to propel themselves in six directions – up, down, forward, backward, left and right, as well as hover. The flight of the dragonfly is so unique that engineers at MIT have done work to mimic its patterns in robotics.

Dragonflies are exceptionally fast, too. The average flight speed of a large dragonfly is estimated at 22 – 34 mph, with a cruising speed of about 10 mph. They can travel at 100 body-lengths per second in forward flight, and around three lengths per second going backwards. Robert John Tillyard’s The Biology of Dragonflies (1917) claims the southern giant darner, a species native to Australia, was clocked at 60 mph.

Many dragonflies are migratory, some traveling great distances. A study tracking dragonfly migratory patterns found that the green darner dragonfly, Anax junius, from New Jersey traveled only every third day at an average of 7.5 miles per day (though one dragonfly traveled 100 miles in a single day). A more recent study suggests that the green darner embarks on a year-long, multi-generational migration. A dragonfly called the globe skinner has the longest migration of any insect—11,000 miles back and forth across the Indian Ocean.

A majority of a dragonfly’s life is actually spent underwater in the nymph stage. Dragonfly nymphs live in fresh water and munch on yes, you guessed it, mosquito larvae, as well as tadpoles and small fish. This stage of the dragonfly’s life can last up to five years, while adult stages can be as little as a few days or weeks. The dragonfly has many natural predators, including several birds and some wasps. Insecticides and water pollution also affect local populations.

Dragonflies are some of the oldest winged insect, with fossils that date back some 300 million years. Some of these show ancient ancestors of dragonflies with wingspans of up to two feet. Today about 3000 species of dragonflies are known around the world. It is in the order Odonata, infraorder Anisoptera, which has three families, 11 subfamilies and 348 genera.