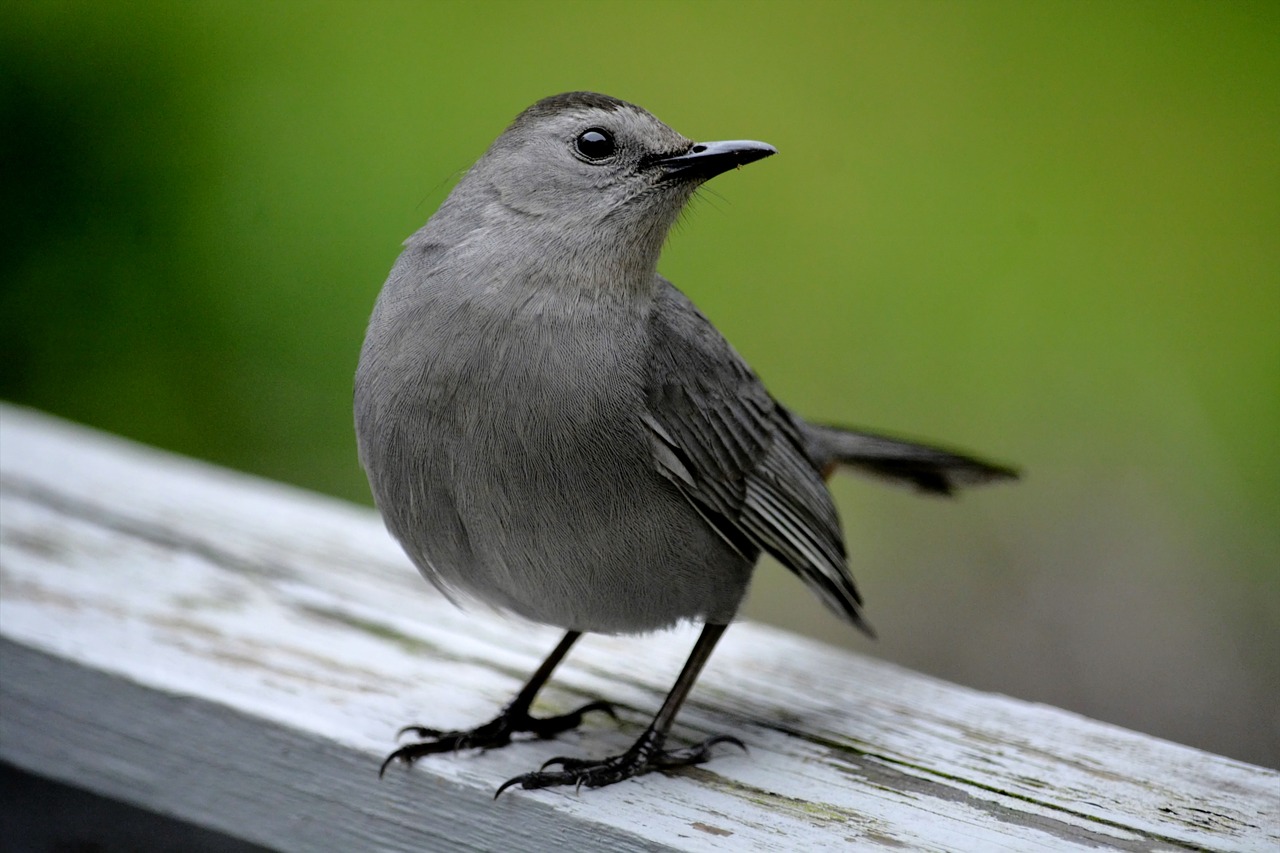 Two common birds that often get mistaken for one another are the northern mockingbird and the gray catbird. Both are in the Mimidae, or mimid, family. They are remarkable song birds, and many species are especially skilled in mimicry of a wide variety of sounds. The name “Mimidae” is Latin for “mimic”.

The gray catbird is pretty much slate gray all over, with a dark cap on its head and dark gray streaks in its wings and tail. It is similar in shape and size to the northern mockingbird, and one of their original classifications translated to “capped mockingbird”. Actually, the gray catbird is probably more closely related to the Caribbean thrashers than mockingbirds. They do however share the ability to mimic other birds, as well as tree frogs and some machinery. The most recognizable call of the catbird is its namesake call, which can sound like the mews or cries of a cat.

The northern mockingbird is the only common mockingbird in North America, and common it is. Its appearance is very similar to that of the catbird except that it lacks the dark cap and has a lighter belly and white tail feathers. The mockingbird also has white patches on its wings that are only visible in flight. Here in the South it is a permanent resident, but we may get an influx of migratory birds if weather conditions are harsh up North.

Listen to an example of a northern mockingbird’s song here.

The northern mockingbird is noted for its intelligence. A 2009 study explored the bird’s ability to adapt to urban environments and even identify individual humans. They can learn up to 200 songs and can mimic an incredible range of sounds, from other birds to cats, dogs, creaky gates or even car alarms with striking similarity. The northern mockingbird’s scientific name, Mimus polyglottos, loosely translates to “mimic of many tongues”.

How Do They Sing Their Songs, and Why?

Birds don’t actually have vocal chords but sing through a special organ called the syrinx that only they have. Located at the top of the windpipe, the syrinx has thin membranes that vibrate to produce sound when air is pushed through it. Song birds can control each side of the syrinx independently, which allows for complex and unique songs, including doubling up or “duetting” notes. Some birds can even sing rising and falling notes simultaneously.

Listen to an example of a Wood Thrush “duetting” notes here.

There is a lot of speculation as to why birds sing songs, and specifically why birds that mimic do so. A popular opinion seems to be that birds build song repertoire to impress potential mates. The idea being that the more songs a male bird knows the longer he’s been around, which equals healthy genetics and good survival skills – both perks in the bird world. Many birds sing to proclaim territories, and in most species only males sing. Some speculation is made that mockingbirds may copy competing birds’ songs as a warning to keep away. This seems unlikely however, as it has been observed that other birds like robins or jays do not respond to the mockingbirds’ imitations.

The mockingbird has certainly made its way into the heart of Americans. Symbolized in literature, in music and on screen, it is also the state bird of Arkansas, Florida, Mississippi, Tennessee and Texas. It was previously the state bird of South Carolina as well, but was replaced by the Carolina Wren.