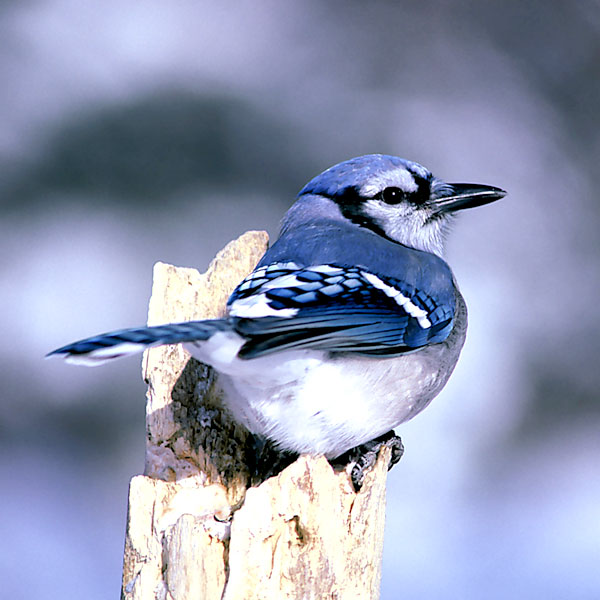 Blue Jays are possibly the most recognizable common birds of North America – you don’t have to be a birder to pick out its bright blue feathers fluttering through your yard. Most of us by now even know its loud caw, and have often seen them squalling with other birds at feeders.

But while we can identify them, do we really know them? Here are some fun facts about Blue Jays that may just blow your mind!

That’s right! We perceive their feathers as blue, but they are actually black. So what phenomenon produces the blue of bluejays? It’s the same science that explains why the sky is blue. Blue Jays (and all blue birds!) use light scattering, meaning when visible light passes through the feathers all wavelengths of the color spectrum pass through EXCEPT the color blue, which is reflected back to us. Unlike the Cardinal, whose feathers have a red pigment that gives them their color, the Blue Jay has no blue pigment. This phenomenon sometimes called “light scattering” or “Tyndall scattering” causes the blue to keep the same hue when viewed from different angles.

Male and Female Blue Jays Have the Same Patterns

Unlike most birds whose males are usually brighter than their female counterparts, male and female Blue Jays look basically the same. This rare distinction, called sexual monomorphism, makes it difficult to tell the sexes apart, although the males are still usually bigger.

Blue Jays are Loud, but Sometimes for a Reason

We’ve all been berated by squawking jays at some point. Originally the name Jay was given to a talkative, impertinent, chatterbox of a person who tended to dominate conversations. Blue Jays were so named because they tend to be loud, lively, and energetic. They are mostly known for being the bullies of the bird-yard, but they can be helpful too. Blue Jays are incredibly good at imitating the call of a hawk, a common predator to most yard birds. The jays will call out a warning to all that can hear when it spots a hawk approaching.

And both mom and dad help raise the young.

Hopefully you’ve learned something new about Blue Jays, and we have all gained a new respect for these beautiful birds!