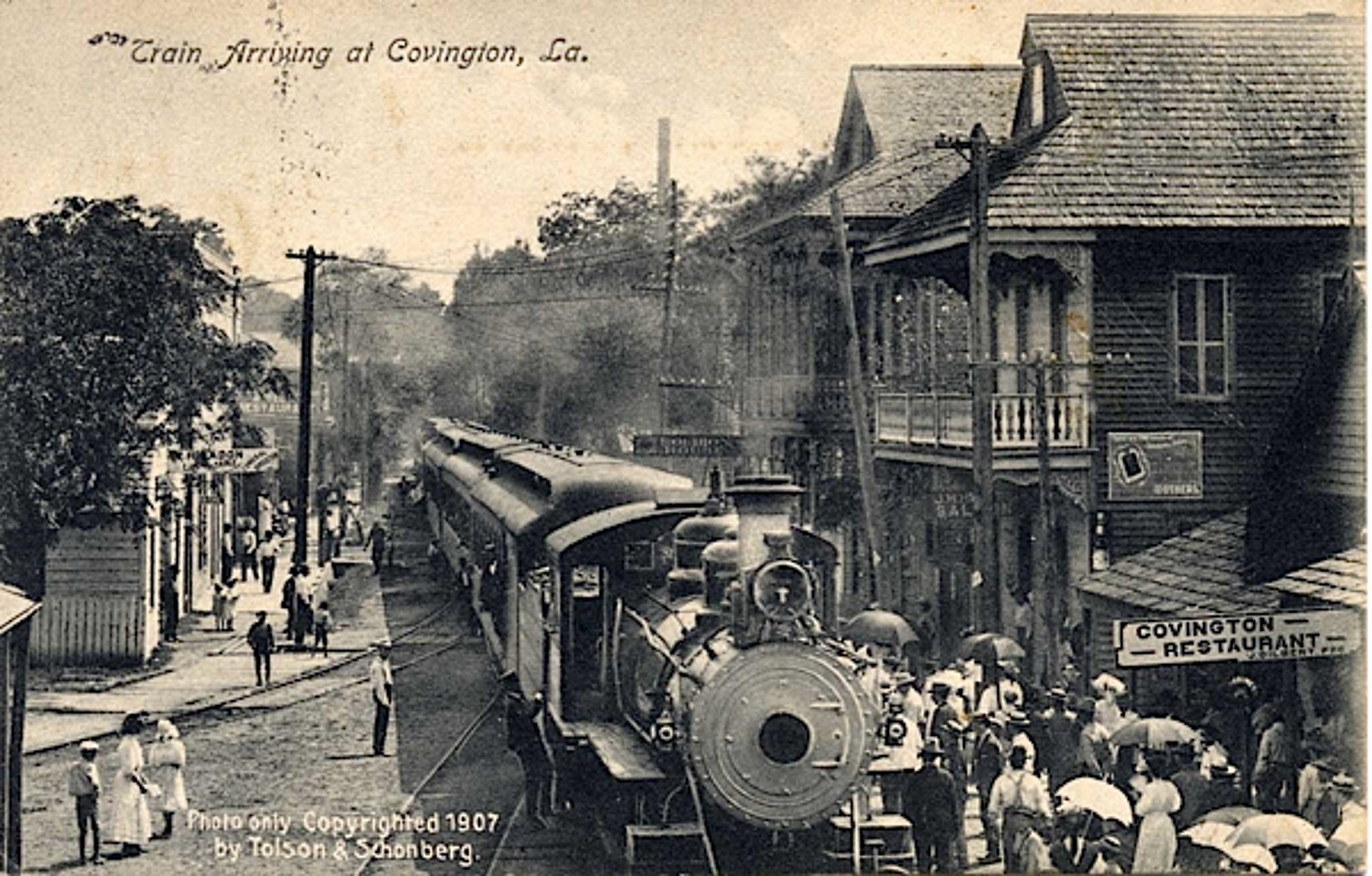 The building at left is D.M. Wadsworth & Bro., General Merchandise.  At far right is Babington & Co.

The Napoleon House, one of the oldest structures in Covington, at the southwest corner of the Gibson Street, Columbia Street intersection.

Columbia Street, mid-block between Boston and Gibson Streets, view towards the south where the Art Association building is today. 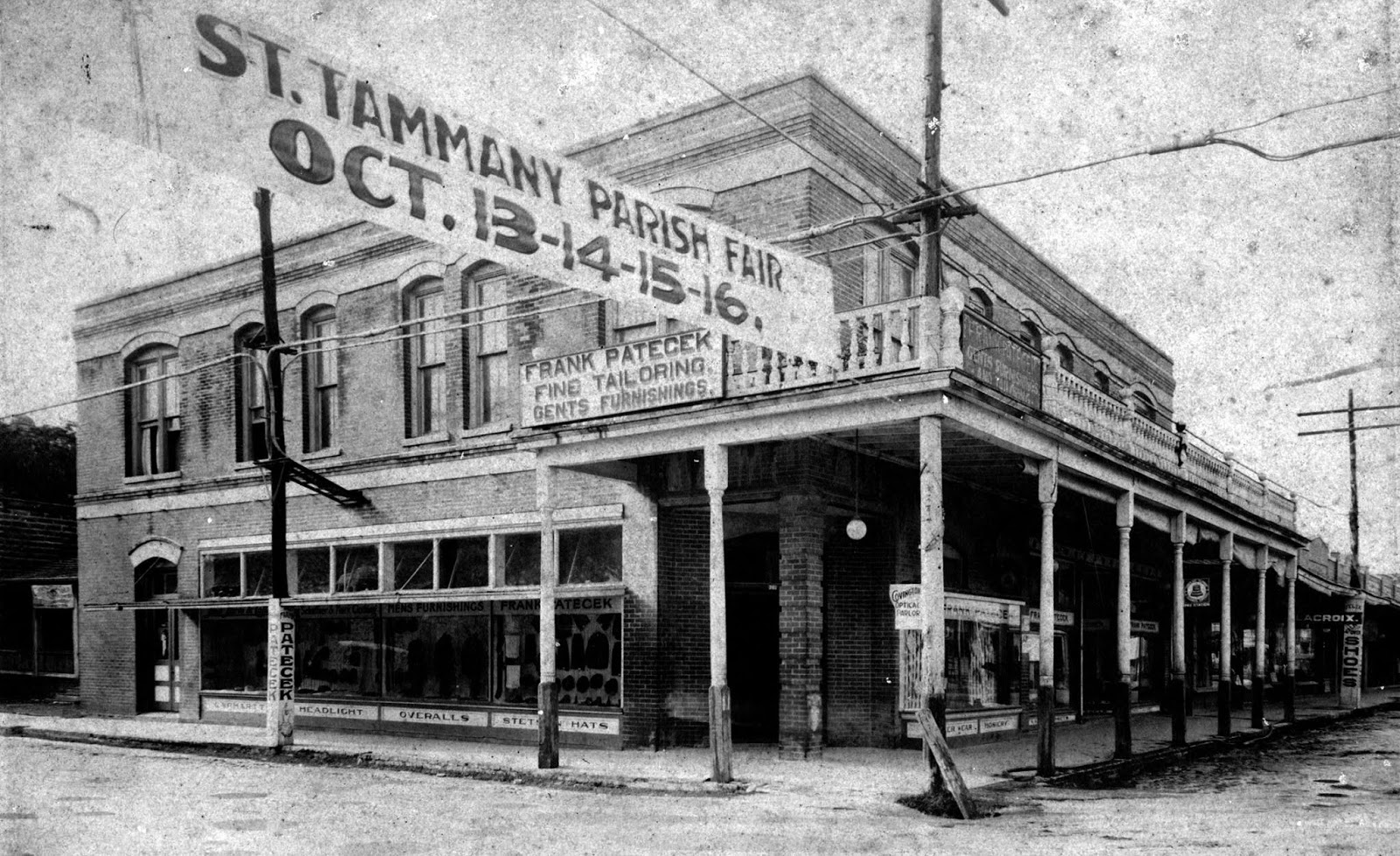 The City of Covington compiled a list of interesting buildings in the city so that visitors (or local residents) could take a walking tour that showcased the historical structures. Below is the list of buildings on the “walk through history” tour promoted during the city’s 175th anniversary in 1988, guided by the St. Tammany Historical Society, with information supplied by Todd Valois.

Walk Through The History of Covington

On July 4, 1813, John Wharton Collins, a New Orleans merchant, founded the city that became Covington on the edge of a parcel of land he owned in the fork between the Bogue Falaya and Tchefuncte Rivers. Collins laid out an unusual system of streets and squares with central lots and alleys that are popularly known as “ox lots.” Collins named the town Wharton and dedicated it to Thomas Jefferson. When the legislature chartered the town in 1816, it was renamed with Collins strong objection to honor General Leonard Covington of Natchez who distinguished himself in the War of 1812.

Two fires destroyed most buildings built before 1880. The original urban design is still visible, as are examples of late nineteenth and early twentieth century storefronts and residences. Visitors may savor the character of a small town at the turn of the century, enjoy shopping, dining and strolling under the majestic live oaks that frame many of Covington’s streetscapes.

Division of Morgan, Commerce and Virtue – Laid out in 1813 as an “Avenue” along with the Division of St. John. Based on the same plan as Canal Street in New Orleans, a tree-lined neutral ground existed down the center of the Avenue. Joseph and Alfred Theard laid out the area in lots and squares in 1879. For the most part, the lots and squares were sold as family homes. As early as 1890, several businesses were opened, establishing the area as an industrial site. In this area were the St. Tammany Ice and Manufacturing Co., the Mackie Pine Oil Plan, Covington Grocery and Grain Wholesalers and the Covington Train Depot.

Covington Cemetery – On December 27, 1817, the founder of Covington, John Wharton Collins, died at his home in New Orleans. He was buried in Covington in accordance with his final request. He was interred on the corner of Columbia and Kirkland. His widow sold the surrounding land to the city five years later for a cemetery.

The Old Railroad Depot, 503 N. New Hampshire – On May 16, 1888, the East Louisiana Railroad reached Covington, heralding an economic boom. The original depot faced New Hampshire Street with a passenger and freight terminal facing east. During the mid-1900s, the Depot was moved one block to the present site (now a restaurant).

Covington Waterworks, c. 1930, 414 N. Theard. Stucco Mission Style building with baroque style shaped gable parapets and a Spanish style roof. It is the only building of this architectural style in Covington, and is located in the Morgan, Commerce & Virtue.

Old Covington Firehouse, c. 1930, 406 N. Theard. This two-story wood frame structure was built in 1940. Living quarters were on the top story and served as home to the family who answered the phone and sounded the alarm for the 3rd Ward (Folsom, Covington and Mandeville). In 1949 the Volunteer Fire Department received a new Seagraves Fire Engine. It was housed in this building while serving the community until the early 1970s. The building is now the home of the Covington Downtown Development Commission.

C.J. Schoen Middle School, c. 1914, 300 N. Jefferson. Formerly Covington Grammar School, this structure is the oldest school building in use in the parish. The school building was on this site as early as 1909.

Covington Bank & Trust Building., c. 1885, 308 N. Columbia. The Bank of Covington was established in these original quarters. It is the oldest commercial building in Covington.

Abadie Family House, c. 1925, N. Lee Lane. Built by Hyacinth Louis Abadie on the old Bogue Falaya River Bridge Road, it is the site of the Louis Abadie store and bakery, c. 1885. Home remembered throughout Covington for its beautiful gardens and landscape. It remained a family home for more than 50 years until it was sold in 1981. Across the street is a mural, “Christmas in the Country,” painted by Elizabeth Bowab Joanen depicting turn of the century Victorian cottages. (1993)

Courthouse Square and Historic Oaks, 510 E. Boston. The first parish courthouse was located across the Bogue Falaya River in Claiborne. The second courthouse was erected on this site in Covington, c. 1850, to be demolished and replaced by the third courthouse, c. 1896. The fourth and present parish courthouse is graced by oaks planted more than 245 years ago, predating our street plan of 1813.

The Southern Hotel Building, c. 1907, 428 E. Boston. This building was constructed at a cost of $100,000. There were once 200 feet of galleries overlooking New Hampshire Street, a formal garden and tennis court. Tame and exotic animals resided in cages in the central lobby surrounding an artesian fountain (now parish offices).

The Christ Episcopal Chapel, 120 N. New Hampshire. Organized and founded in 1846, it is the oldest public building in use in St. Tammany Parish.

Patecek Building, 301 Columbia. In the early months of 1995, total restoration of this historic building began. Built shortly after the Great Fire of 1898, the building provides a beautiful example of turn of the century commercial architecture. For more than 60 years, 301 Columbia has housed retail stores and holds the distinction of its second floor being Covington’s first telephone exchange.

Seiler Building, 434 N. Columbia. Built in the early 1900s and still known as the Seiler Building, this historic landmark once housed one of the most prominent saloons, cafe and oyster bars in St. Tammany Parish. Of note were the massive solid mahogany bars and counters throughout this fine example of turn of the century urban architecture.

Champagne Grocery, 427 N. Columbia. This beautiful structure once housed the Champagne Grocery, founded in 1919, which remained open for more than 60 years. In a time when groceries were delivered and for many years after Champagne’s was an important part of everyday life in Covington. When one thinks of the small town grocery and a distant way of life, one thinks of Champagne’s.

Old Freezer Plant, 526 N. New Hampshire. Built in 1945 as the Growers Cooperative Association and better known as the “Old Freezer Plant,” this building holds the distinction of being the first and only community freezer plant in the area. At a time when most families did not have their own freezers, this building once housed many a holiday turkey or ham. Many residents still remember picking up their store of meat from the freezer.

Columbia Street Landing, End of Columbia. The birthplace of Covington, this active harbor once docked schooners and steamers and brought many early settlers to Covington. Established in the early 1800s, it was a vital link to other river cities transporting cotton, lumber, bricks, whiskey and mail. Oyster luggers used the port to transport fresh oysters to the community through the 1930s. Today, Diamond Bullet Design, the creator of this web site, is located in the home at the street’s end, just above the landing.

Covington Ice House, 322 N. Florida. This structure was built in 1910 and served as the Covington Ice House until the 1920s when it became home to D’Aquin’s Wholesale Grain Company. Blossman Gas Company occupied the building from 1934 until it was renovated as Tyler Downtown Drugs and Cafe Cabaret.