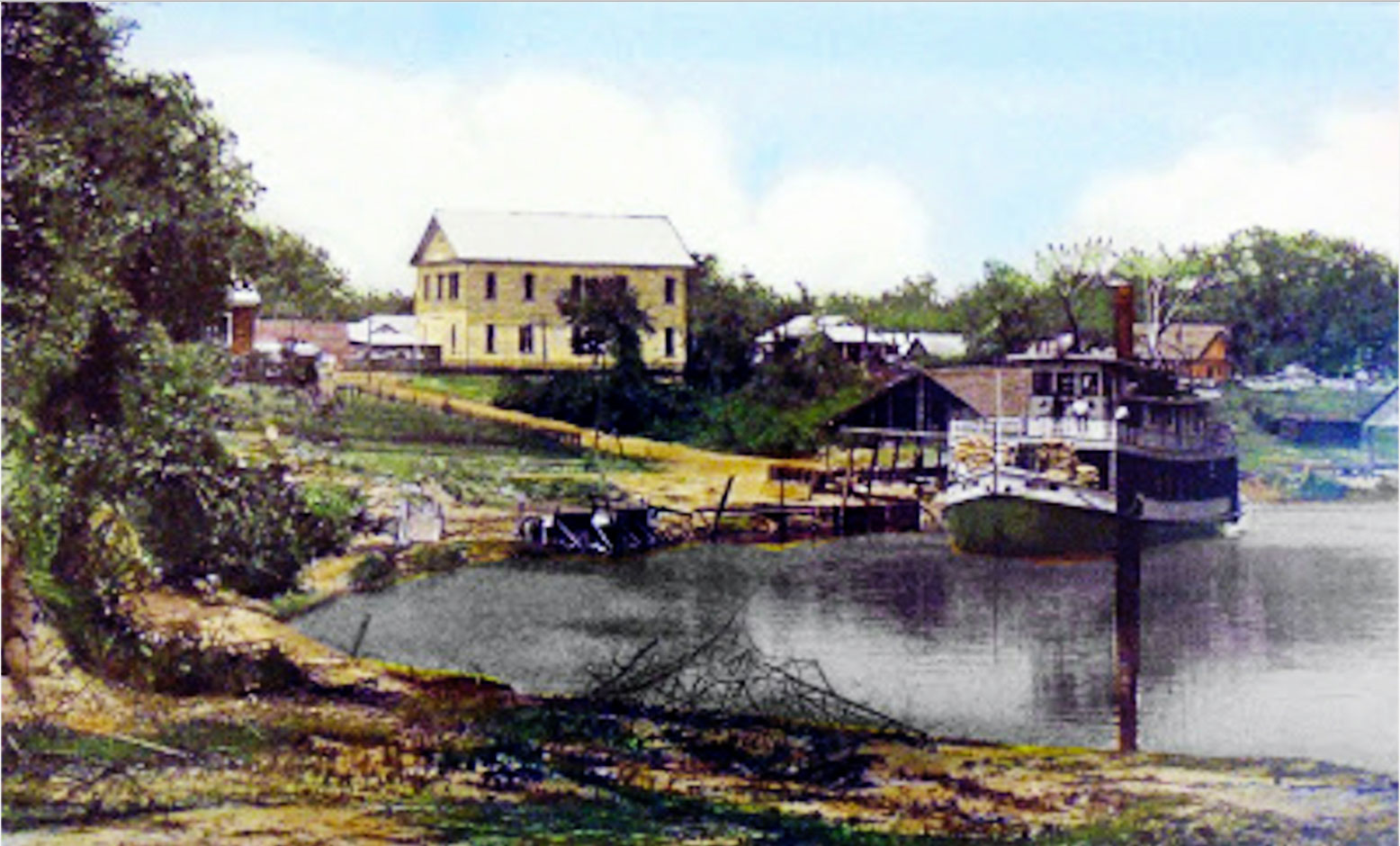 H. A. Mackie of Covington wrote an interesting overview of the Historical Highlights of St. Tammany Parish, and it was published in the June 26, 1953, edition of the St. Tammany Farmer. It was also reprinted on a handout for the Covington Sesquicentennial.

Here is the text as written by H.A. Mackie.

Highlights of History of Covington and St, Tammany Parish, La.

The SETTLEMENT that was to be called Covington was originally named Wharton, located on the east bank of the Bogue Falaya river, where Claiborne now stands. The old courthouse is still there, re-modeled, as a residence. It was used only a short time as a courthouse.

The development of the settlement was rapid, especially after it was moved to the west bank of the river and the name changed from Wharton to Covington, by an act of the State Legislature, passed March 16, 1816. On April 2, 1832, a charter was granted by the State Legislature to the City of Covington.

Covington was named after a prominent citizen of the time, General Leonard Covington. One story goes that a large amount of whiskey was shipped to New Orleans from Covington, Ky., through Wharton which suggested the name. That is probably, only a fable.

St. Tammany parish was the nearest high land to New Orleans and became the gateway to the north and a source of much needed material for building New Orleans, and other products for the city’s development.

New Orleans, being surrounded by water and marshland, the only contact with the rest of the country was by transportation on the Mississippi river and Lake Pontchartrain.

The navigable rivers in St. Tammany parish, offered a desirable means of trading merchandise for raw materials. The Little Tchefuncta, Bogue Falaya and Abita rivers, formed the Big Tchefuncta river about 20 miles from Lake Pontchartrain. The route was directly across the lake to the mouth of the Tchefuncta. Deep water at Covington, made the highland country, with its resources, accessible to New Orleans as far north as the Great Lakes.

The route into New Orleans from the lake was by the new and old canals. Both reached into the heart of the city where the produce, cotton, cattle, hides, wool, timber, charcoal, fuel, wood, naval stores, sand, brick and gravel, supplied the needs of the coming great city, New Orleans.

All of the buildings in New Orleans were made from St. Tammany parish materials. To get some idea of how old Covington is, in 1803 the Louisiana Purchase took place in the Cabildo at Jackson Square. The Cabildo buildings, the St. Louis Cathedral and all surrounding structures had been built of material from St. Tammany parish, years before. The trade and traffic of which, had been handled in and around this location.

Before the saw mills were operated here, the logs from the hills of St. Tammany parish were rolled or dragged to the nearest water courses leading to the rivers, made into huge rafts and floated to the mills on the new and old canals in New Orleans, where they were cut into lumber.

The writer remembers well, the rafts of logs that filled the new canal born Claiborne to Broad street and Martin’s large saw mill at Galvez street. Sand, gravel, wood, charcoal and gravel were hauled in schooners and barges.

At first, mule teams towed the boats to the head of the canals, but later this chore was done by steam tugs. Much cotton found its way to New Orleans from St. Tammany parish.

Old-timers will remember the charcoal schooners at the head of the canals. St. Tammany charcoal and pine wood was the fuel used most in New Orleans in those days. Brick and sand made up much of the tonnage for the boats. The remains of many brick kilns may be found on the rivers in St. Tammany parish today.

After the settlement was moved to its present location, the river front at Columbia Street became the focal point of land and river traffic. Passenger and freight boats made regular trips to New Orleans, some of which were steam driven.

The country north of Covington for 100 miles was covered with virgin yellow pine, some of the finest in the world. It was government owned, but acquired by settlers through homestead rights. A settler could get title to 180 acres by cultivating and living on ten acres for a period of ten years.

A main road was established due north through Mississippi into Tennessee, and was used by Gen. Jackson on his way from Tennessee to fight the Battle of New Orleans. He took a boat at Covington and crossed Lake Pontchartrain to get to New Orleans. The road to Covington was called Military Road, because a military post was established on the river north of Covington. It became the artery of traffic to the north, serving the settlers. from St. Tammany parish to Tennessee.

The settlers would take days, sometimes weeks, to drive their ox teams to town to trade their produce with the merchants and buy provisions to last them for months. Many farms were started along the way. Sheep and cattle business developed, lumber and naval stores operations became extensive and large mercantile houses handled a large volume of business.

A branch of the Union Bank of New Orleans was located on Rutland and New Hampshire streets, the old brick foundations are still on the spot. The manager of the bank lived in the then famous Rosedale Mansion on Portsmouth (now Wharton) and New Hampshire streets. This old mansion was burned about 1899, and the present frame structure was built about 1901.

When the Yankee gunboats came up the river to take Covington, the banks money was hidden in a tank buried in the yard of the owner of the bank. The tank was removed in 1915 by the present owner of the property, but no money was found. If there had been any money in the tank, it would have been Confederate and worthless.

The early activities of the settlement started at Columbia street and the river and radiated out into the forests. Foot paths became wagon roads, then highways and now ribbons of concrete to all parts of the country.

The land on the river front was owned by a man named John W. Collins. On March 19, 1814, he dedicated it to the town and laid out the squares, streets and lots. The record reads, “It is humbly dedicated to the late President of the United States, Thomas Jefferson, giving use of all streets, alleys, water courses, with timber thereon, as shown by plat, referred to in the body of this dedication.” After the execution of the dedication, Mr. Collins proceeded to sell the lots to interested citizens.

In the squares, a 20-foot alley was cut through, with an ox lot 120 by 120 feet, in the middle to accommodate the farmers’ teams at night, to keep the oxen off the streets. This dedication by Mr. Collins, was a part of the Division of St. John.

As an illustration of how the town started to develop, the writer has titles and descriptions of property on Portsmouth street (later Independence, now Wharton), between Columbia and New Hampshire, which Includes lots 9, 10, 11, 12, 13, 14 and 15. The following names are recorded, as purchasers of the lots:

After the Civil War the railroads came from the north to New Orleans, and commerce and river traffic to and from St. Tammany parish faded. Mercantile houses became country stores, the deep water at the foot of Columbia street filled with sand and only small boats can be accommodated now.

The boll weevil took its toll of cotton, the timber played out, the W. P. A. ruined the farmers and with the discontinuance of passenger train service, Covington almost became a ghost town. But with its good climate, timber re-growth, pure artesian water, good drainage, beautiful trees, white sand bathing beaches, Covington has become the place of recreation and health for the people of New Orleans and other parts of the state and nation.

As business people of New Orleans retired, many established homes and beautiful estates in St. Tammany parish, creating a substantial income for the community. A network of good highways have helped the situation greatly.

Covington and surrounding area have large educational institutions, drawing students from other states and foreign countries.

The new $365,000 parish hospital will add much to the desirability of Covington as a residential city. The tung oil industry and cattle raising, have been developed on a large scale in this area.

A naval stores plant was established in Covington in 1911 and has operated continuously since, with a considerable payroll and benefit in land clearing, pine stumps being the raw material used.

There are many very old business places and residences in and around Covington, which would make good reading, if their histories were told. Few cities in America are more interesting and beautiful than Covington.

The parish has other interesting places. Slidell has large and important industries; Madisonville has its shipyards; Abita Springs and Mandeville are famous recreation and health resorts.

St. Tammany parish is a pleasant and healthful place to live in and has a most promising future. It is 68 miles by road and 35 miles by air from New Orleans.

When the Greater New Orleans Expressway is built, St. Tammany parish will be the front yard of the big southern metropolis and its most beautiful residential district.

Click on the images below to make them larger.