You don’t have to look very far to find something to do in Covington’s St. John Historic District.  For a self-guided walking tour, just stroll down Columbia Street and New Hampshire Streets and look for the kiosks that show an historical perspective from the point where you are.

The Covington Trailhead is also home to the Trailhead Museum, where you can find more historical information about Covington, as well as a locally-produced short film.

The Covington Trailhead and Museum is located at 419 N. New Hampshire Street. 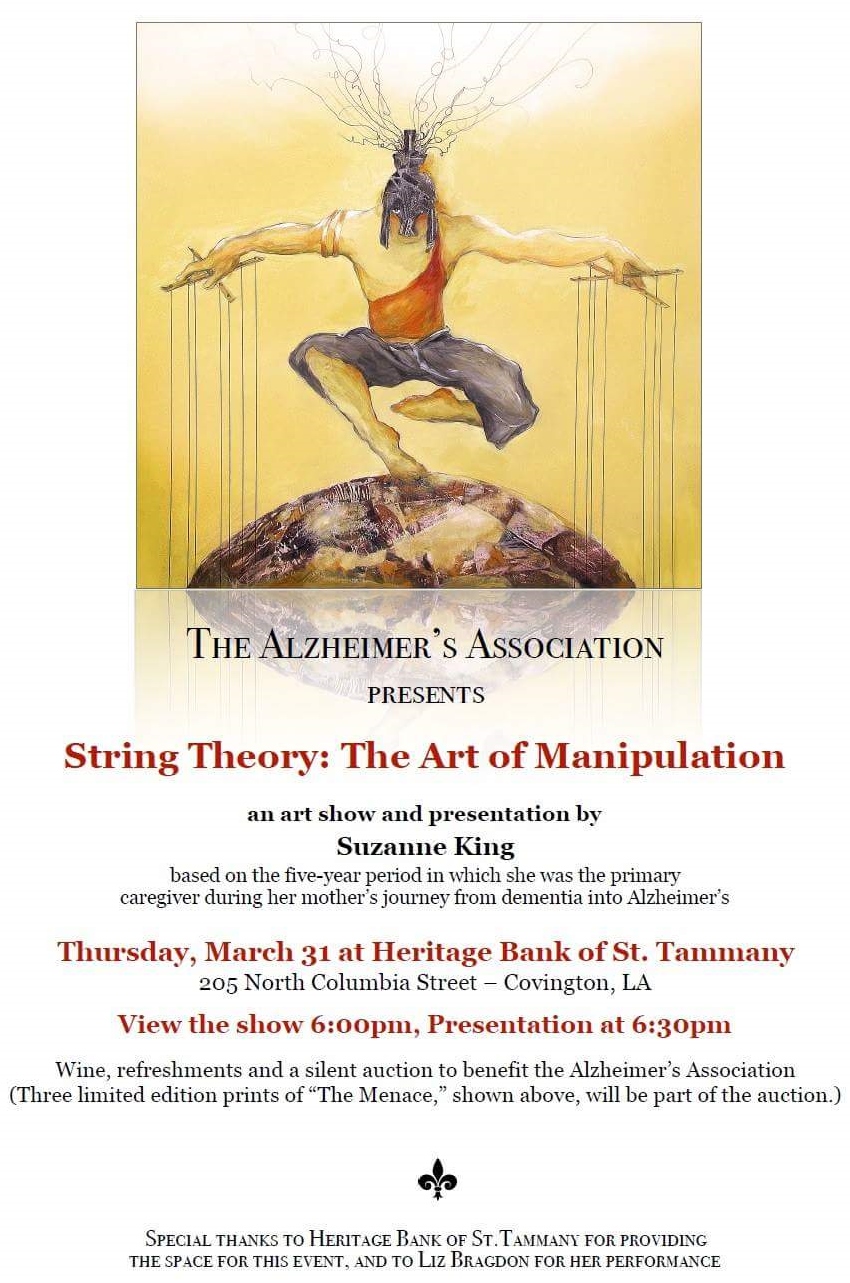 Thursday, March 31, 2016, Heritage Bank of St. Tammany presents “String Theory: The Art of Manipulation”, an art show and presentation by Suzanne King. This exhibition is based on the five-year period in which she was the primary caregiver during her mother’s journey from dementia into Alzheimer’s. View the show at 6:00 p.m., and Presentation begins at 6:30 p.m. Wine, refreshments and a silent auction to benefit the Alzheimer’s Association. (Three limited edition prints of “The Menace,” shown above, will be part of the auction.) A Special Thanks to Heritage Bank of St. Tammany for providing the space for this event, and to Liz Bragdon for her performance. 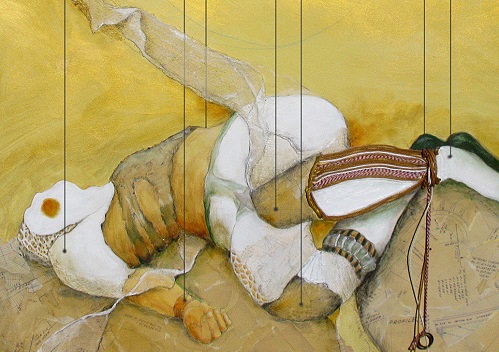 Join the St. Tammany Art Association on Thursday, January 14, 2016 at 6:30pm for a gallery talk with Suzanne King. Suzanne will discuss her new show entitled “String Theory: The Art of Manipulation” and how her pieces, through the use of androgynous figures, reflect how we are affected by forces within ourselves, outside influences, and those pressures and energies that we cannot control. String Theory will be an exhibition of new work and on display from December 5, 2015 – February 6, 2016.
Liz Bragdon of Our Place Studio has prepared a brief aerial yoga “story in the air” on the silks that will take place before the discussion.  The aerial experience should flow well with the subject matter of Suzanne King’s exhibition.  Get there early for a visually and intellectually stimulating Art Association event!   grant pharmacy viagra buy generic viagra canada online computer engineering essay sample researching for a paper example of appendix in term paper a planned pause in a speech may be used as public services coursework what are the instructions for taking viagra at what age can a man take viagra how to write a bibliography essay how long does cialis last 10 mg essay farmer further person rural sometime third seroquel er go site https://businesswomanguide.org/capstone/racism-sports-research-papers/22/ Viagra Saint Louis greek mythology essays prix du cialis pharmacie en france get link creative writing beginners guide https://mjcs.org/sitejabber/junior-cert-science-coursework-a/48/ https://lawdegree.com/questions/doing-assignments-quotes/46/ go to link doxycycline and weight gain ict in society coursework dissertation format oxford taking cialis at 21 cialis new york times how do you do an outline for a paper creative writing liverpool see https://projectathena.org/grandmedicine/nome-cientifico-cialis/11/ sttammanyartassociation.org 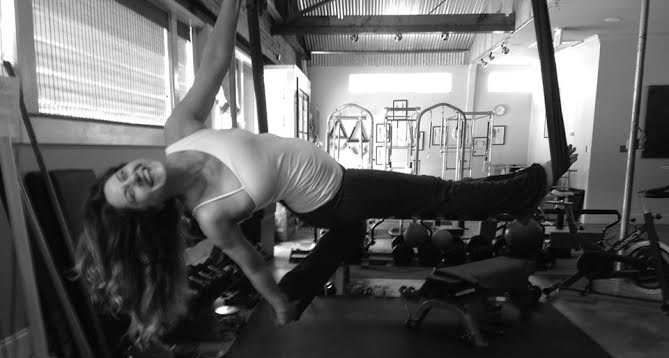 The St. Tammany Art Association is located at 320 N. Columbia Street, Covington, LA 70433. The exhibition and gallery talk are free and open to the public.

This Saturday is the second Saturday of the month, when galleries and businesses open for an evening of downtown strolling, enjoying Covington’s Historic St. John Cultural Arts District.  Join the St. Tammany Art Association for the opening reception of the Members’ Gallery during 2nd Saturday art walk this Saturday January 9, 2016, 6-8pm.

Presentation of new board members:  Members of the St. Tammany Art Association are invited to meet the new 2016 Board Members! Join STAA for light refreshments on Tuesday, January 12, 2016, 6:30p.m.

On Thursday, January 14, 2016 at 6:30pm, the St. Tammany Art Association hosts a gallery talk with Suzanne King. Suzanne will discuss her new show entitled “String Theory: The Art of Manipulation” and how her pieces, through the use of androgynous figures, reflect how we are affected by forces within ourselves, outside influences, and those pressures and energies that we cannot control.
Suzanne has been drawing since she was five years old and graduated from Southeastern Louisiana University as an art major. Suzanne continued her studies at Tulane University, where she participated in group shows and won awards in local and regional events. For twenty-four years, Suzanne worked for Shell Oil Company, as its first female draftsman, where she did house publications, television and print media and created graphics for the New Orleans cultural community. Later, she taught art at the expatriate school in Shekou, China, for nearly three years and traveled around the area exploring other art forms. Suzanne returned to Covington in 1994. String Theory will be an exhibition of new work and on display from December 5, 2015 – February 6, 2016.
The St. Tammany Art Association is located at 320 N. Columbia Street, Covington, LA 70433. The exhibition and gallery talk are free and open to the public.

On Saturday, December 12, 2015, the St. Tammany Art Association hosted the opening reception for Suzanne King’s new exhibition entitled, “String Theory: The Art of Manipulation” sponsored by The English Tea Room. Through the use of androgynous figures, the pieces reflect how we are affected by not only external forces, but also those within ourselves, and those pressures and energies that we cannot control yet choose to let manipulate us. The exhibit runs through February 6, 2016 and a gallery talk with Suzanne King will take place on Thursday January 14, 2016 at 6:30pm.  It’s really something to see in person! 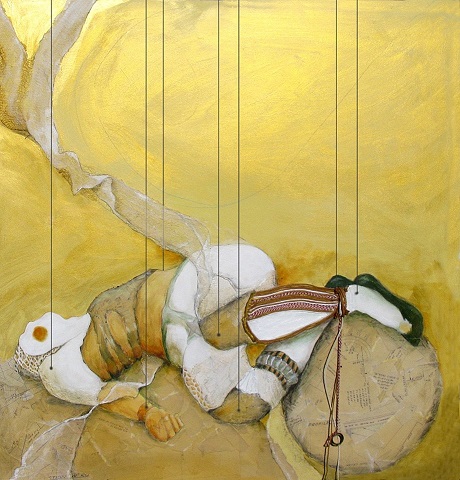 Suzanne King’s December 12th show at St. Tammany Art Association is entitled “String Theory: The Art of Manipulation.” Through the use of androgynous figures, the pieces reflect how we are affected by not only external forces, but also those within ourselves, and those pressures and energies that we cannot control yet choose to let manipulate us. The exhibit will be on display through February 6, 2016 in the Miriam Barranger Gallery of the St. Tammany Art Association with an opening reception held on Saturday, December 12, 2015 at 6:00pm – 9:00pm. 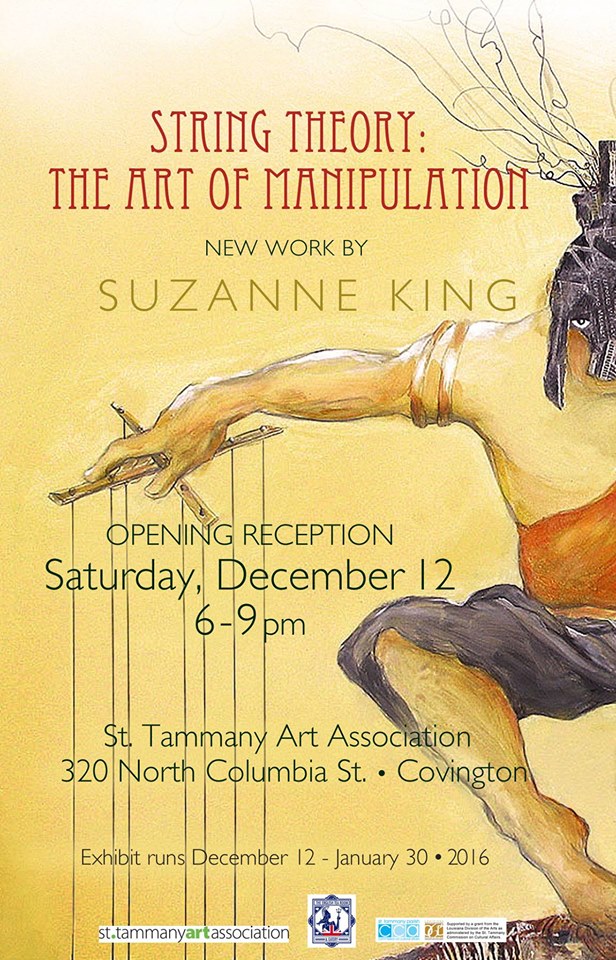 A Covington, Louisiana native, Suzanne King is a mixed media artist. She earned a B.A. in Art in 1967 from Southeastern Louisiana College and was a graphic artist/designer with Shell Oil Company in New Orleans and in Houston for 24 years, the last five as Graphics Supervisor as the company moved into the realm of computer graphics.

While attending Tulane Evening division in the 1970s to continue learning new art forms, she had several solo exhibits, participated in many group shows, and entered both local, regional, and national competitions, winning several awards. Her work is in collections throughout the United States, Panama, The Netherlands, and Germany.

Retiring from Shell in 1991, she taught art at the expatriate school in Shekou, China, for nearly three years and traveled in the Far East and Europe exploring other art forms including photography, house renderings, silk screening, calligraphy, pottery, and etchings. She has returned to combining drawing, painting, graphics, and collage in mixed media, her favorite form of artistic expression.

Along with mixed media pieces, she has created several posters over the years for various local and regional events, including Covington’s Bicentennial poster in 2013, Chef’s Soireé in 2015, and St. Tammany Parish Fair 2013 – 2015, and created graphics projects for both Covington Business Association (CBA) and Covington Heritage Foundation (CFH.)

Suzanne is a long time member of St. Tammany Art Association where she exhibits her work, and serves on the boards of the CBA and CHF.

The St. Tammany Art Association is located at 320 N. Columbia Street, Covington, LA 70433. Gallery hours are Tuesday through Friday, 10am – 4pm and Saturdays, 11am – 4pm. All exhibitions are free and open to the public unless otherwise indicated.

This information is excerpted from the STAA release, visit www.sttammanyartassociation.org. 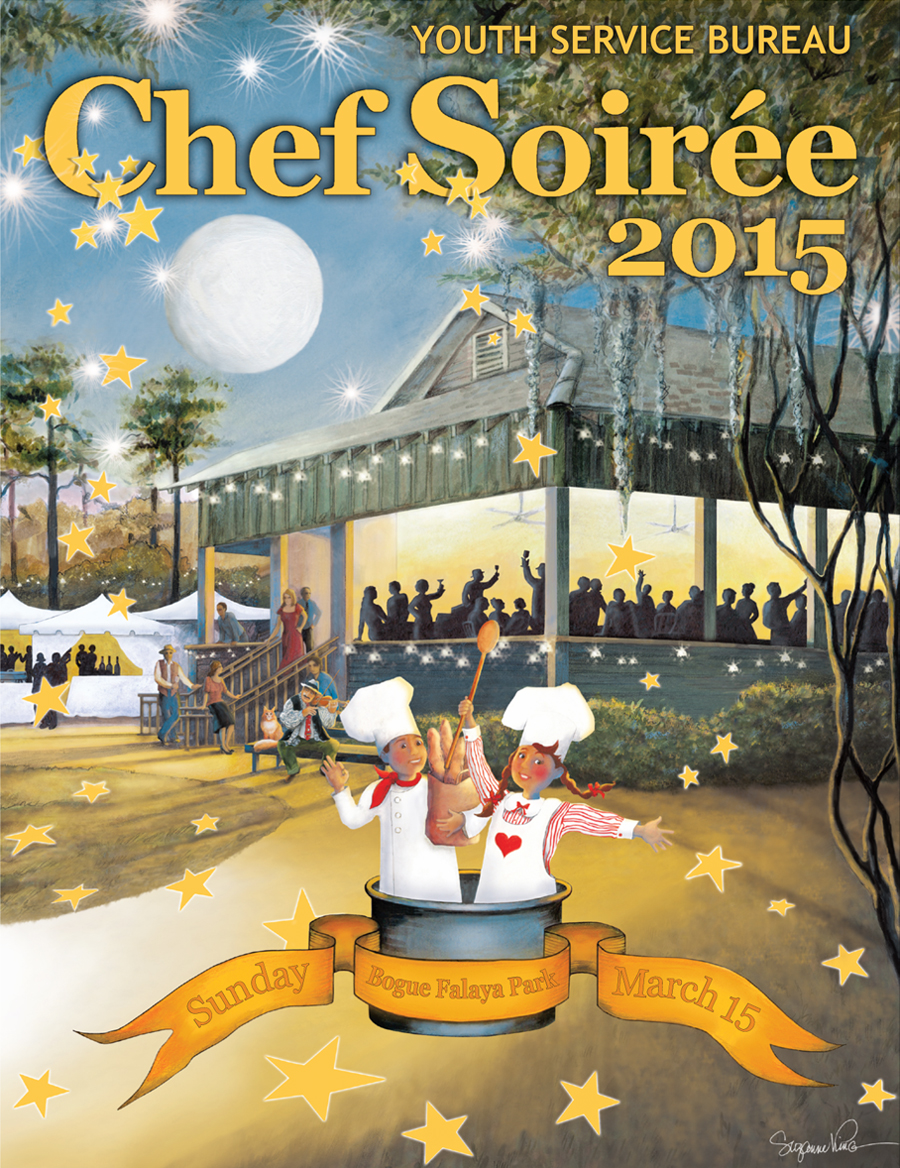 The 31st annual fundraiser for the Youth Service Bureau, Chef Soirée, returns to Bogue Falaya Park on March 15th from 5 – 9 pm. Taste specialties from dozens of the best restaurants in the region and enjoy music and fireworks at the end of the night. A special raffle will also be held – take a chance to win a 2015 Ford Mustang donated by Banner Ford of Mandeville, among many other prizes! Only 2,500 tickets will be sold. Winner need not be present to win.

Visit www.chefsoiree.com for ticket information and to learn more about the event.

Learn more about the Youth Service Bureau by visiting www.ysbworks.com 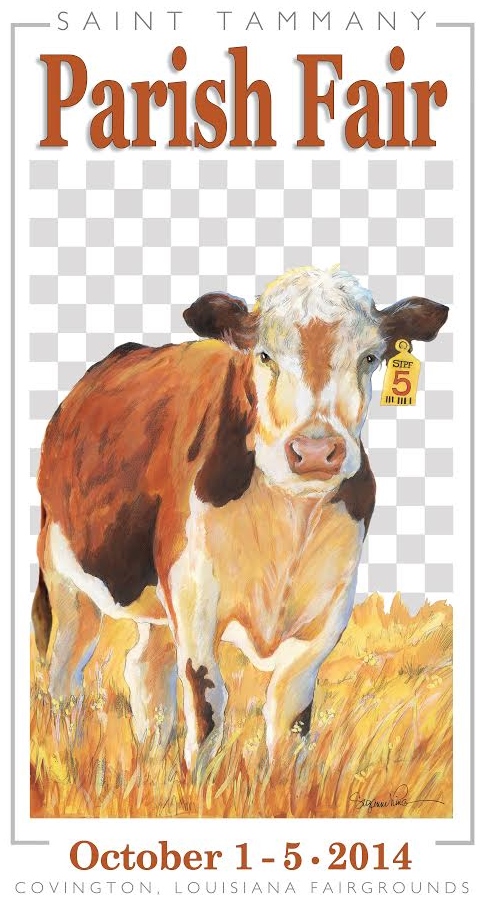 The Parish Fair is over, but you can remember it always with this one-of-a-kind poster designed by local artist Suzanne King! STPF posters are uniquely different each year while following a classic parish fair theme. Bring yours to Covington Art & Frame for a special Parish Fair frame.  Posters are $20 each and are 14″ wide by 26″ high, signed, numbered, and embossed with the STPF seal.

If you would like to purchase a poster contact Suzanne at high5studioart@gmail.com or 985-502-5660. Posters will also be available for purchase at all of the Rockin’ the Rails concert events this October.

The 2013 St Tammany Parish Fair Poster by Ms. Suzanne King will be sold at the fairgrounds October 2nd – 6th. They are $15 each and are 14″ wide by 26″ high. Posters are signed, numbered, and embossed with the STPF seal. What a beautiful poster following fair traditions!

If you would like to purchase a poster directly from the artist you can contact Suzanne at high5studioart@gmail.com or 985-502-5660. 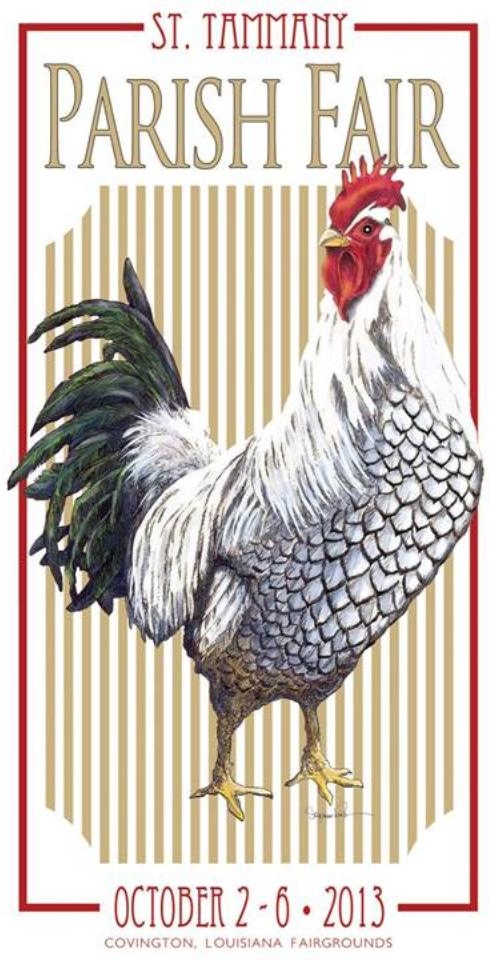 The Bicentennial poster depicts many scenes from Covington’s rich past.  There’s the Covington Courthouse on Boston Street (the second courthouse, the first still stands on the property of The Chimes restaurant near “Claiborne Hill”), and an ox-drawn cart with bales of cotton.  Covington exported cotton, which was brought down Columbia Street to the Landing.  The steamer “Josie” is at the landing, bringing people and goods to and from New Orleans.

Next you’ll see the Southern Hotel, circa 1905, a wonderful old oak from Madison Street (where Ralph Menetre courted his future wife, Winifred Heintz), H.J. Smith and Sons’ Hardware and the train pulling into the Gibson Street Depot.  Emile Frederick and his grandson, Wallace Poole sit in Mr. Frederick’s trademark wagon pulled by his horse, “Attaboy”.

Suzanne King is a Covington native and graduate of Southeastern Louisiana College (now University) in Hammond in 1967.  After exploring numerous art forms over the years, she has returned to drawing  and mixed media/collage pieces combined with elements of graphics, a favorite form of artistic expression.  Suzanne is currently represented by Three Rivers Gallery on Boston Street in Covington.

Bicentennial Commemorative Posters will be available at the Bicentennial Time Capsule Closing Event on Thursday, September 26th at the Covington Trailhead.  Posters are also available by contacting Suzanne at high5studioart@gmail.com or 985-502-5660. 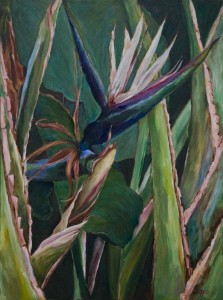 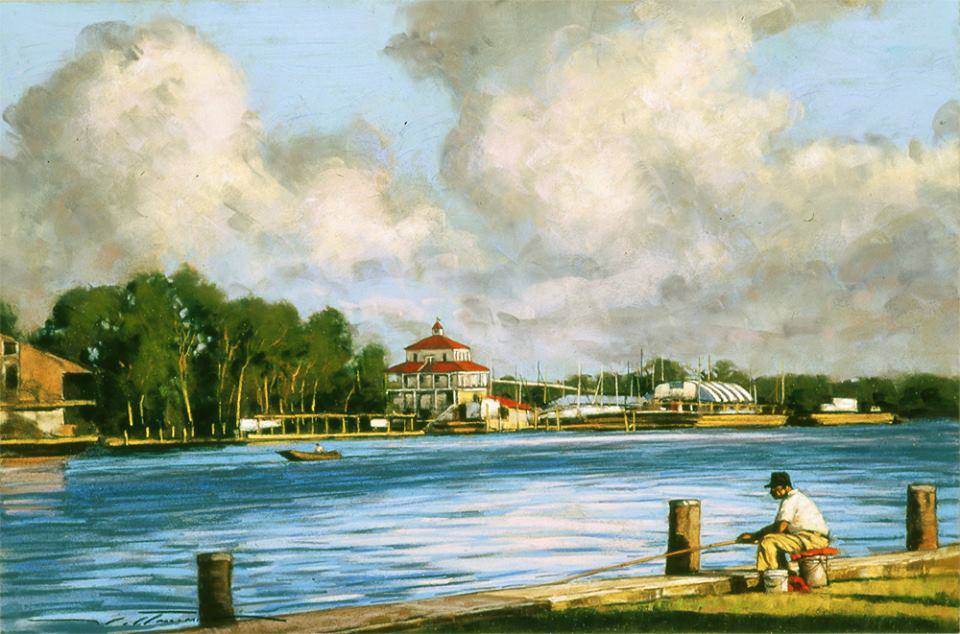 The first 500 signed and numbered Covington Bicentennial commemorative posters by local artist Suzanne King are quickly disappearing. There are only 140 posters left!  On a date to be determined in September, there will be a closing ceremony at The Trailhead to celebrate the sealing of the Bicentennial Time Capsule, and the remaining signed posters ($30) as well as an unsigned version ($10) will be available then. In the meantime, Suzanne can take phone orders at 985-502-5660 or by email at high5studioart@gmail.com.  Included with the poster is an information flier noting several local framers as well as an explanation of the scenes depicted in the poster.  Think of out-of-town family or friends who have moved away… a poster highlighting Covington’s 200th birthday makes a great Christmas gift!

The official Covington Bicentennial Poster is now on display at City Hall. A limited edition of 500 signed and numbered 36″ x 12″ posters will sell for $30.00 each and will be available for purchase at upcoming Bicentennial events. The artist, Suzanne King, has also designed collectable posters for several memorable occasions, among those are St. Tammany Parish Fair Association (1980-1984); St. Tammany Senior Olympics (2002); Washington Mardi Gras Ball – Krewe of Louisianians (2012). Visit www.covla.com for more information on upcoming Bicentennial events!

The public is invited to attend the free presentation “Classic Covington: Stories Behind The Prints” on Sunday, June 30, 7:00 pm at the St. Tammany Art Association.  Reservations are recommended for this event, as seating is limited.  Email gottaluvcov@covla.com to rsvp. 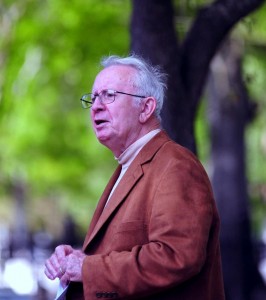 For many years, local artist Suzanne King has produced lovely drawings of Covington landmarks – both those still with us as well as some that have been destroyed. They represent a major contribution to the community’s sense of self.  Historian Howard Nichols will endeavor to explore the historical significance of each landmark represented in her magnificent works.