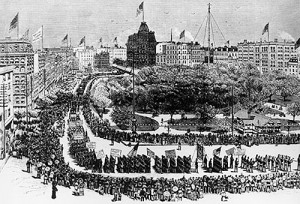 Labor Day is this Monday, September 2nd (the first Monday in September), and it celebrates the economic and social contributions of workers.   Thirty states officially celebrated Labor Day before it became a federal holiday in 1894.  Congress unanimously voted to approve rush legislation that made Labor Day a national holiday following the deaths of a number of workers by U.S. military and U.S. Marshals during the Pullman Strike.  It was signed in to law a mere six days after the end of the strike by President Grover Cleveland.  Labor Day has become an important sale weekend for retailers, and many people relax with outdoor activities, family gatherings and cook-outs.