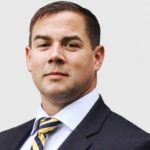 ST. TAMMANY PARISH, LA — Nick Tranchina announced today that he will seek election to the office of St. Tammany Parish Sheriff in 2019. Nick is a veteran of the United States Marine Corps and after his service, he served St. Tammany residents for nearly 17 years in various capacities, including patrol deputy, narcotics detective, property crimes detective, street crimes investigator, special operations supervisor and training sergeant until he retired in 2014. During his years of service, he also served on the Special Weapons and Tactics (SWAT) team, the Hazardous Devices Unit (HDU), and the Dive Recovery Unit.
While maintaining his full-time job and raising a family, Nick continued to grow in his profession and sought after higher education. Nick earned his Bachelor’s degree in Management of Criminal Justice from Concordia University Wisconsin and a Master’s degree in Criminal Justice Administration from Loyola University New Orleans. Nick is also a Certified Fraud Examiner (CFE) and holds a Master Certificate from Cornell University in Human Resources.
“The people of St. Tammany Parish deserve a sheriff who has their best interest in mind. We live in a hardworking community and the people want to trust their sheriff and know the necessary care, safety, and security is being provided to them in a responsible and transparent manner,” Nick said. “As your sheriff, I will serve the people and reestablish the trust between our community and police.”

Nick continued his public service as a reserve deputy with the Sheriff’s office and remained in this role until recently when he decided to run for Sheriff. “I believe that serving the community in some way is an important part of my obligation and responsibility, because I care for people who live, work and visit St. Tammany,” Nick said. Nick currently works as a senior corporate investigator for a Fortune 500 company where he investigates concerns involving violations of policy and procedure, operations, employee behavior and specific concerns raised by management and employees.
Nick, 44, is a lifelong resident of St. Tammany Parish and is married with four children. This is Nick’s first attempt running for political office.
Find St. Tammany Parish Sheriff’s Office on Facebook, online at www.STPSO.com and Twitter @STPSO.