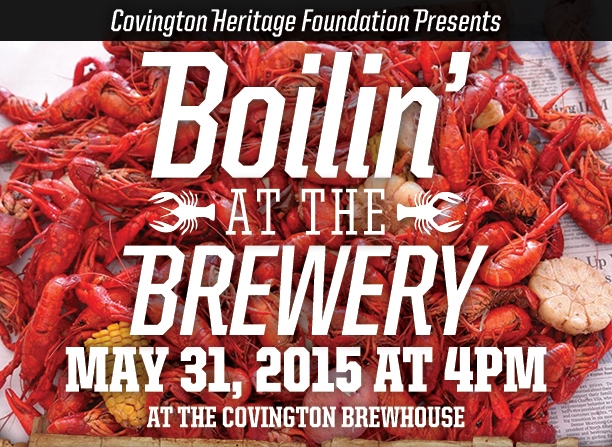 Save the date for Covington Heritage Foundation’s “Boilin’ At The Brewery” at the Covington Brewhouse on May 31, 2015 at 4 PM. This is a great opportunity to renew Membership with the Covington Heritage Foundation and enjoy boiled crawfish and locally crafted brews. Purchase tickets online at covingtonheritagefoundation.com or call 985-373-0623. The CHF was established in 2013, with the mission of preserving the culture, character and community of Covington. 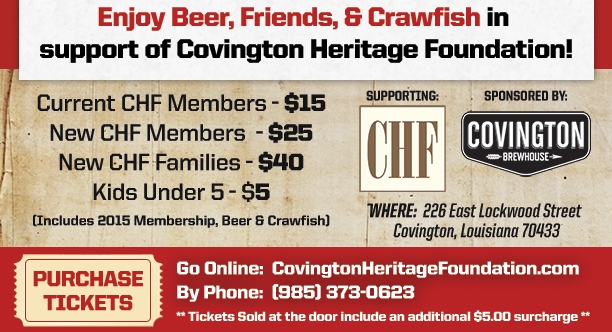 The Junior League of Greater Covington is hosting open houses this summer for prospective members who reside in St. Tammany Parish. Please contact Bernie Taylor at bernie02@bellsouth.net. There is an open house Saturday, July 26 from 9 a.m. to 10:30 a.m. at 529 N. Columbia Street in Covington. Two more open houses will be held, one on Saturday, August 16 from 9 a.m. to 11:30 a.m., and the last on Thursday, August 28 from 6:30 p.m. to 8:30 p.m., at the same location.

The Junior League of Greater Covington is an organization of women committed to promoting volunteerism, developing the potential of women and improving the community through the effective action and leadership of trained volunteers. Its purpose is exclusively educational and charitable.

Reaching Out Statement
The Junior League of Greater Covington reaches out to women of all races, religions, and national origins who demonstrate an interest in and commitment to voluntarism. 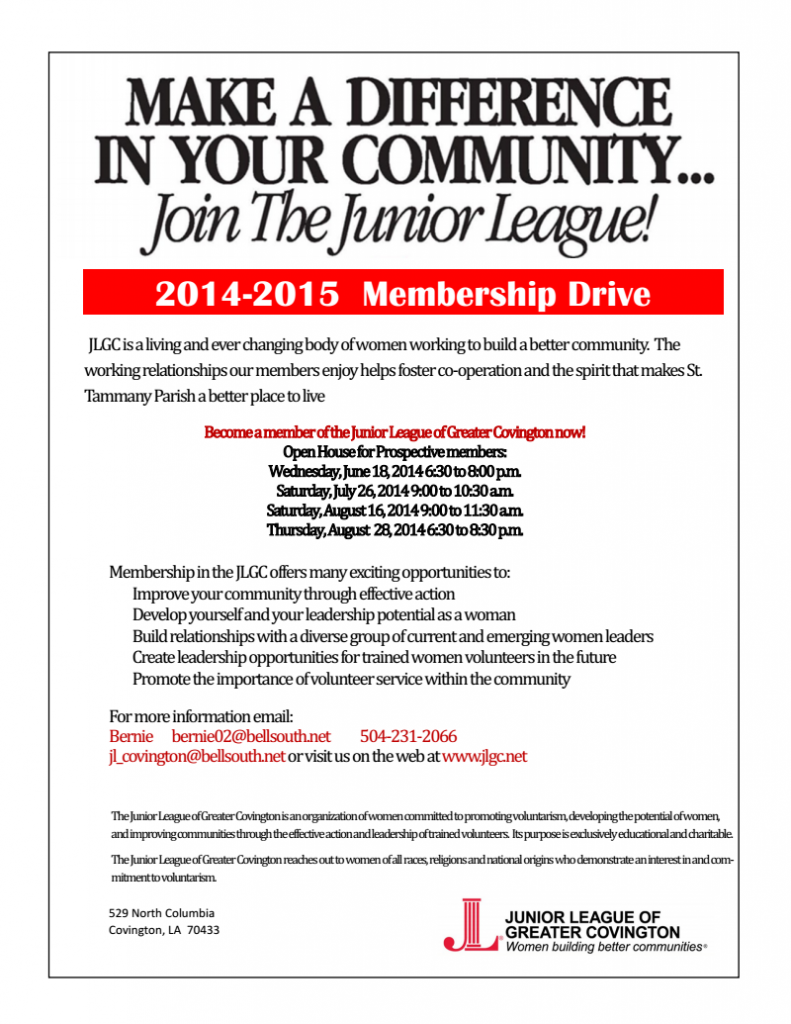 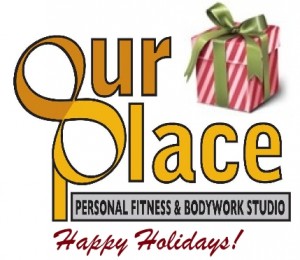 The Playmakers Theatre is a non-profit for the arts started in 1955. Playmakers holds community plays each year as well as offering many excellent theater classes for adults and children. The season starts off with “Moon Over Buffalo” on March 9th, a brilliant comedy written by Ken Ludwig and directed by Kay Files. With a cast of zany characters, this is one of Ludwig’s best plays. The next play, running May 11th through the 27th, is “Three by Tennessee” (three plays by Tennessee Williams: “The Lady of Larkspur Lotion”, “A Perfect Analysis Given by a Parrot”, and “The Case of the Crushed Petunias”). Auditions will be held for “Three By Tennessee” on March 11th and 12th at 7pm. Later this year is “Little Shop of Horrors”, running July 13th through the 29th. Playmakers is looking for directors for two upcoming shows, “The Nerd” and “My Fair Lady”.

Playmakers offer an annual membership in which you receive notice of all plays, auditions and workshops, and you have the right to vote at the annual business meeting. Becoming a patron of Playmakers gets you preferred seating, recognition in the play programs, and an invitation to their annual Patron Party.

The St. Tammany Art Association was founded in 1958 by a small group of civic-minded individuals dedicated to bringing art to western St. Tammany Parish. Today the Art Association has over 800 members and serves as a catalyst for the arts. The organization has grown into a new building in downtown Covington to further serve the needs of emerging and established artists, and to provide arts education and exhibitions to the community.

The St. Tammany Art Association has new exhibits monthly featuring local artists. They are currently showing their Members Exhibit, displaying the art of the very talented members of the Art Association. The next opening reception is on March 10th, with a group showing of artists Jessica Danby, Gerald Canon, Kathy Rodriguez and Aaron McNamee. The exhibit will be titled “Engagement” and will explore the concept of communication: how we ‘engage’ one another, and new ways that we communicate. To view more upcoming exhibits, visit the Art Association website listed below.

The Office Manager and Gallery Attendants are available Monday through Saturday to answer questions about classes, exhibitions, reserving space, or becoming a member of STAA.