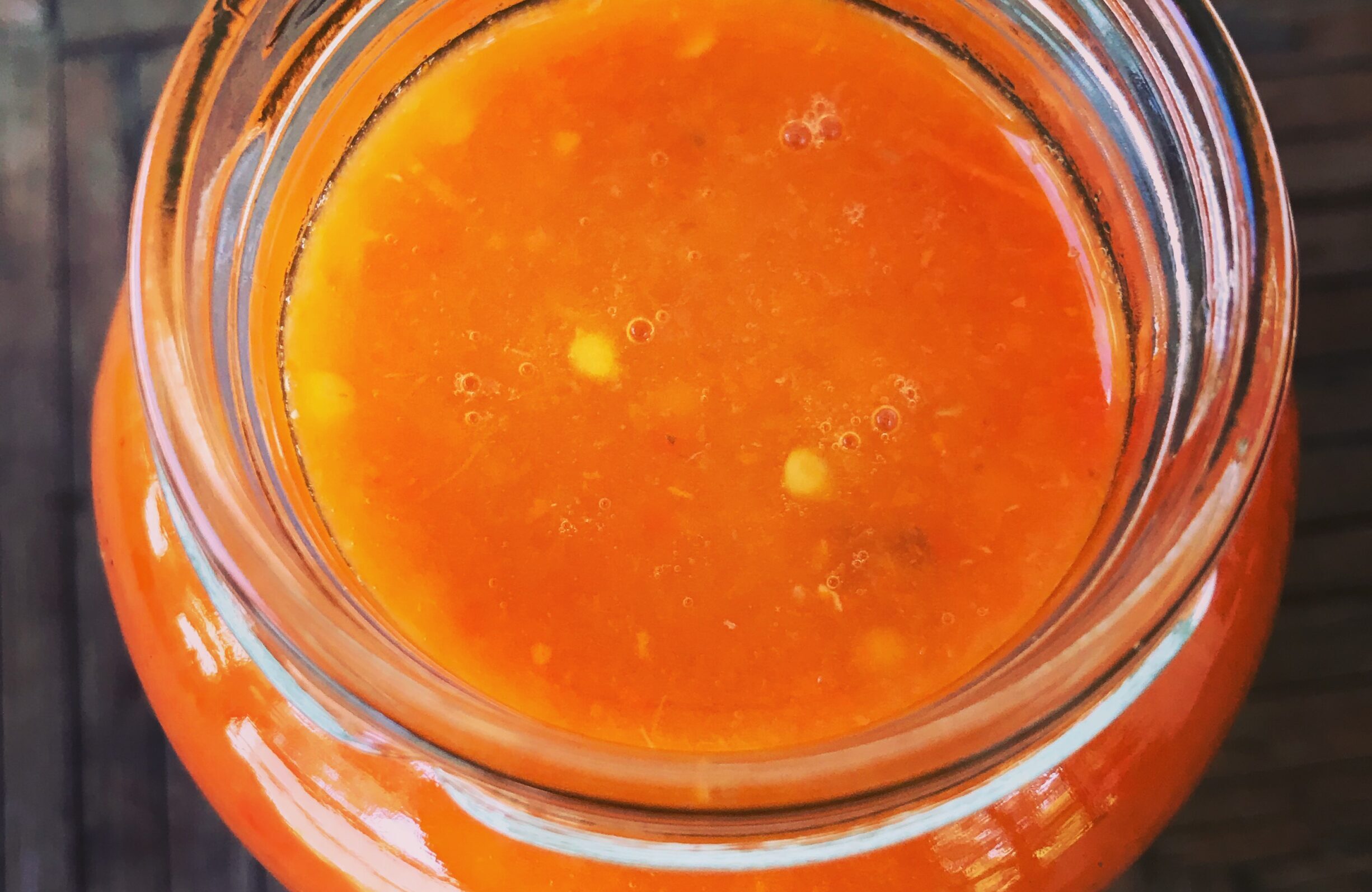 Louisianaians cherish their hot sauces. Everyone has their favorite – some of us even carry it around with us. On the list of necessary condiments, hot sauce comes right after salt and pepper.

The good news for us is that hot peppers grown in abundance in our climate. Cayenne, scotch bonnet and tobasco peppers are some favorites. Add one (1) to any dish and you will know it’s there. This means that if you buy a bunch from the market, or have them growing in your garden, you are left to figure out what else to do with them.

Wonder no more with this easy and delicious homemade hot sauce recipe! You can adjust this recipe depending on how many peppers you have and how spicy or savory you want it to be by adjusting your hot pepper/sweet pepper/garlic ratios. Any hot pepper will do – the redder, the better. I used a blend of scotch bonnets, tobasco peppers, banana peppers and a red bell pepper. The yellow of the banana peppers brightened into a nice orange when I blended it up. Just cut the stems off your hot peppers and leave the star tops on for extra smoky flavor.

Note: seriously, use caution when dealing with hot peppers. Use gloves or wash hands immediately with cold water when handling. DO NOT touch your eyes, face, or any other sensitive areas. Cooking peppers can be a very cleansing experience, especially for your sinus cavities. Breathe with caution.

Notes: this hot sauce will separate over time. Just give it a shake before using. If it really bothers you, you can add 1/2 teaspoon xanthan gum during blending to emulsify the sauce.

Want the real deal? Try lacto-fermenting your peppers instead! Follow the procedure here in our Lacto-Fermentation Recipe and skip the cooking – just ferment and blend! This is a more traditional hot sauce – it should still be refrigerated, but will keep several months. 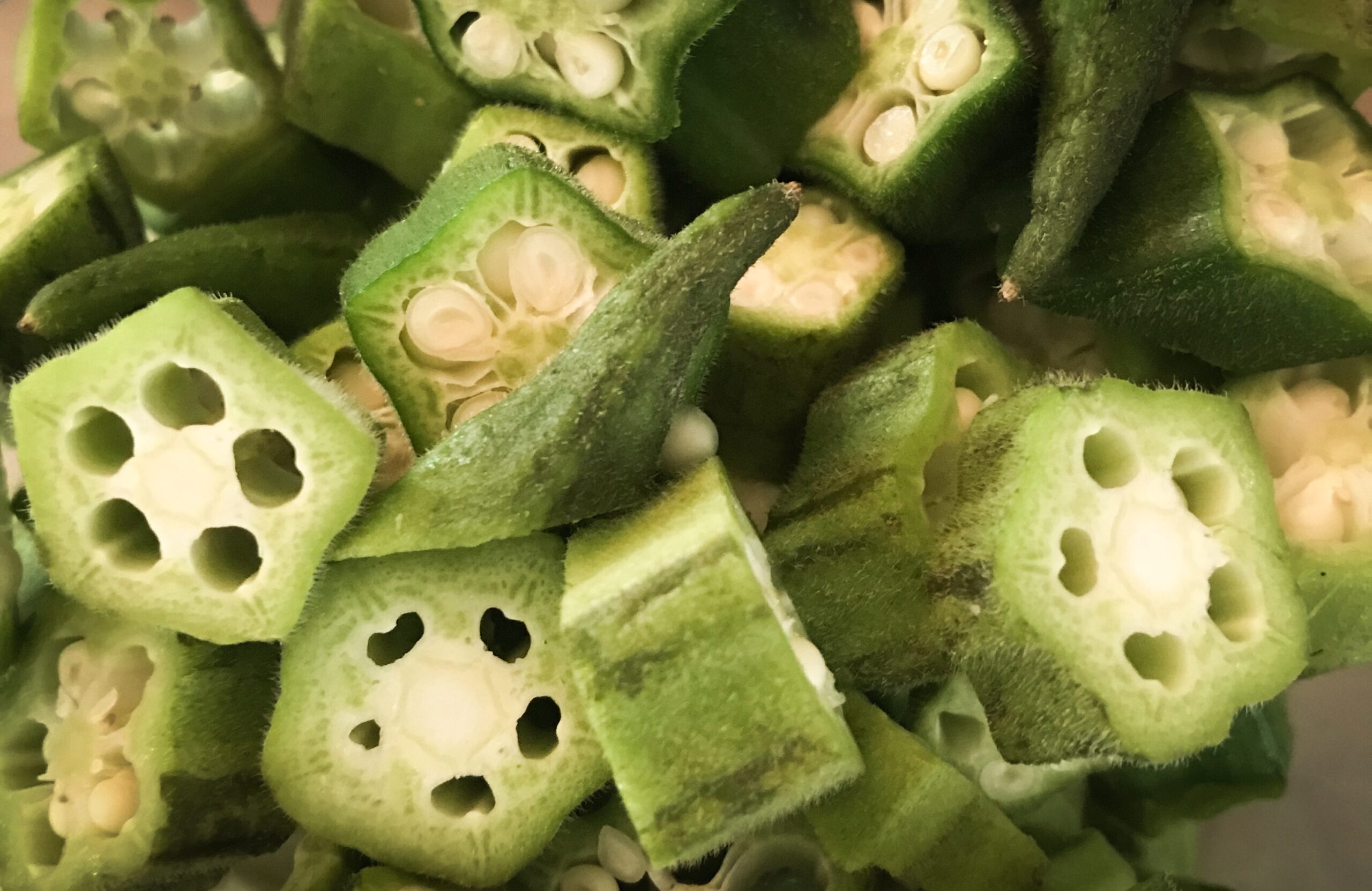 I, like many people, was immediately thrown off okra the first time I tried it. It was stewed, maybe even from a can, and the slimy consistency made me want to gag. For years I put off okra as one of those “gross” vegetables – until I happened upon pickled okra (probably in a Bloody Mary). I never knew okra could be so delicious! Crisp skin, little flavor seed bombs – I was hooked. And I wondered, how could I make an okra dish taste this good?

So I tried, recipe after recipe. Some said the acidity of tomatoes will cut down the slime, others swear that you need lemon juice to do the trick. I have found a splash of apple cider vinegar to be the secret to a truly slime-free okra dish. Finishing off in the oven gives a nice crisp texture and helps to cut back the acidic bite. You might add a bit of honey, too. We just add a couple spicy peppers, such as cayenne or tabasco. PS, this is a great recipe to pull out the cast-iron skillet!

Okra is all the rage at the Covington Farmers Market these days! Check out this bountiful harvest from Sam’s Sprouts!

Heat a large oven-proof skillet on high, add enough oil to lightly cover the pan. The trick here is to keep this dish as dry as possible by cooking off liquids. A good flash sear on the okra first will do it.

When the skillet is hot (drop of water sizzling away hot) toss in okra with a little salt and pepper. Cook about 5 minutes, then add onions. Saute until onions are tender, then add tomato, garlic, herbs, spices and apple cider vinegar. If you are adding hot peppers, do so now. Mix evenly with a little more salt and pepper to taste. Let simmer for 5 – 10 minutes, until vinegar has absorbed and tomatoes have cooked down.

Toss in lemon juice and pop it in the oven. Roast for 10 – 15 minutes – until okra and tomato tops begin to get crispy and a good bit of the liquid has evaporated. If you are adding honey, toss in now and let cool slightly before serving. 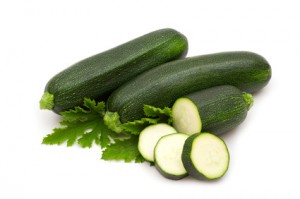 Pasta of your choice, prepared

Meanwhile, heat the red sauce in a medium sized pot. Add the halved tomatoes and chopped sweet peppers. You can add some crushed red pepper flakes for a spicier sauce (optional). Once the sauce is almost to a boil, add the chopped fresh basil (save a few sprigs for garnish).

Serve the zucchini over the red sauce and pasta, topped with fresh grated parmesan and a basil sprig. Enjoy!

Follow these topics: Farmers Market Recipes, This Week at the Farmer's Market 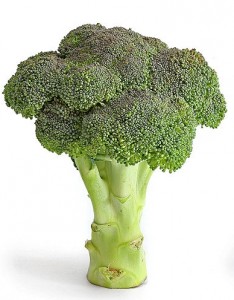 Cooking Instructions:
Heat oil in a large soup pot over medium heat, add onions and garlic and saute until translucent (5-10 minutes).  Add salt, pepper, cayenne and herbs, then add the vegetable stock and potatoes.  Bring to a quick boil, then reduce heat and simmer until potatoes are tender (about 10-15 minutes).  Add chopped broccoli and simmer until broccoli is tender (about another 10-15 minutes).  For a smoother consistency, you can mash it up with a spoon or puree the mixture in a food processor.  Serve hot topped with green onions and drizzled olive oil with a side of toasted bread.
This soup gets its creaminess from the potato instead of cream or butter. These ingredients may be added for a thicker soup.
Basil is helpful with inflammation, works to help oxidize the blood, and contains antibacterial properties. Oregano is also an antioxidant and a powerful antimicrobial herb.  Use the two together for maximum effect! 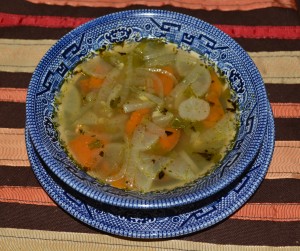 Heat the water in a soup pot.  Once the water is boiling, add the oil, salt, pepper, cayenne and paprika.  Basically, just mince all ingredients, place it all in the soup and bring to a boil.  I use a larger amount of parsley and cilantro (1/2 a cup to 1 cup, chopped), so I add this in with the veggies.  Add the chopped ginger root as well.  After the soup is back to a boil, it may be turned down  to a simmer and cooked to preference.  When the soup is ready to serve, turn off the flame and stir in the remaining herbs.  Serve with bread.

Ingredients:
1 cup brown rice
1 cup vegetable broth
1 large diakon or other radish
a couple of carrots
1 large tomato
a cup of trimmed whole snow peas or edamame
a cup of sliced broccoli
1 red bell pepper, half minced and half sliced
1 large onion, half minced and half sliced
1 clove of garlic, minced
1 tablespoon of minced ginger
some chopped green onions
2 tablespoons of butter
2 eggs
4 teaspoons of soy sauce or liquid amino
2 tablespoons rice vinegar
1 teaspoon of toasted sesame oil
cayenne pepper and salt to taste, hot red pepper sauce to taste, crushed peanuts
Cooking Instructions:
Start by mincing and slicing the vegetables. Slice the radish and carrots into medallions, saving a little of the ends for grating. Clean and trim the ends of the whole peas, cut into one inch pieces. You can cook the rice while you prep and set aside to cool. Saute the minced onion, bell pepper, garlic and ginger in 1 tablespoon of butter with a little salt and cayenne. In another pan cook the slightly scrambled eggs in the other tablespoon of butter, stirring them often to keep them fluffy. Add the sliced radish, carrots, tomato, peas, broccoli, bell pepper and onion to the sauteed veggies and stir. Add the rice, broth, soy or amino, vinegar and oil, and stir some more, cooking on medium high. The eggs should be well cooked at this time, add this too. Do a little more stirring. Add a little more salt, cayenne and hot red pepper sauce to taste. Stir a bit more until all is well mixed (you can see where this dish got its name!)
Serve topped with grated radish and carrots, chopped green onion and some crushed peanuts.

This is a simple cough and cold remedy that can be made with items found readily in the kitchen.

2 tablespoons of honey (local is best)

Mix all ingredients well. Ginger and garlic are optional, but recommended. Take by tablespoons. This mix is surprisingly delicious, and incredibly soothing on a sore throat.

This recipe is from “Herbal Folk Medicine, An A to Z Guide” by Thomas Broken Bear Squier.

1 to 2 tablespoons of cayenne pepper

1 to 2 teaspoons of fresh horseradish root

Place honey in a glass jar, add pepper and horseradish, mix well. Can be stored in the refrigerator for a period of time. When using this remedy, only a 1/16 teaspoon dose or just a tiny dot will do. The mixture is very potent and you will feel it start to work immediately. The horseradish clears all congestion, the honey will coat the throat and the red pepper will warm it and stop the hurt. This syrup may also be used in a tea.

A Syrup for the Kids

If the above recipes are a little too intense or “weird” for the kids, try this one.

Fit loosely separated onion slices into a glass mason jar and fill with honey until onions are completely covered. Let this mixture sit overnight. The honey will pull out all the oils from the onion, and you can pull out the remaining onion in the morning with a fork. Keeps for a while refrigerated. Mix with a little lemon juice or apple cider vinegar when serving.

REMINDER: Children under 2 should not consume honey.

Consult your physician if symptoms persist or worsen.

Here are a few do-it-yourself cough syrups that come in handy when you feel a sore throat coming on.

1 to 2 tablespoons of cayenne pepper

1 to 2 teaspoons of fresh horseradish root

Place honey in a glass jar, add pepper and horseradish, mix well. Can be stored in the refrigerator for a period of time. When using this remedy, only a 1/16 teaspoon dose or just a tiny dot will do. The mixture is very potent and you will feel it start to work immediately. The horseradish clears all congestion, the honey will coat the throat and the red pepper will warm it and stop the hurt. The horseradish root can be changed out for 1/4 cup of garlic or ginger root, and may be used in a tea.

recipes from: “Herbal Folk Medicine, An A to Z Guide” by Thomas Broken Bear Squier