From New Orleans to the world Johnny is known for his blistering electric harmonica tone, Award winning song writing, Swamp, Roots, Americana Accordion and Larger then Life stage presence. Johnny’s music career has brought him from his early professional years backing up Chicago blues legends, Jimmy Rodgers, Robert Lockwood Jr, John Lee Hooker.  Johnny continues to forge forward on world wide tours with his band , As a solo artist and as a member of New Orleans super group The Voice of The Wetlands All Stars. 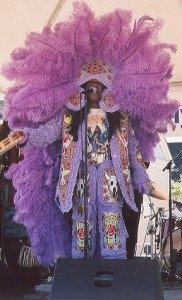 The New Orleans Mardi Gras Indian phenomenon is part music, part heritage, part ancestry, part revelry, part fashion, and oft misunderstood.  Chief Monk Boudreaux is one of the most famous and enduring leaders of that culture and head of the Golden Eagle Mardi Gras Indian tribe.  Music has also become a vehicle for raising awareness of the plight of coastal erosion.  Boudreaux joined forces with blues guitarist and singer/songwriter Tab Benoit and an all-star band of musicians in the project “Voice of the Wetlands.” The group recorded and performed songs aimed at raising awareness of this issue that is central to the viability of the region.
See them both at the Covington Trailhead this Thursday for the final Rockin’ the Rails of the season.  Brought to you by the City of Covington, Rockin’ the Rails is a free concert series open to the public.  Food and drinks are available for purchase.  Visit covla.com